Snow Damage in the Coop Yard 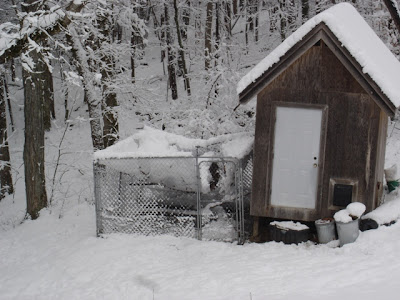 We had record snow for March, just outside of St Louis,
and it proved too much for the chicken yard.
We have to wire the top of their pen because the hawks
sit in the branches above it just waiting for their opportunity.
The wire also covers the sides so nothing can slip
in between cage and coop.
Plus it runs up the lower sides with the bottom
buried beneath soil and rock so nothing can dig under.

Leaves had fallen on the chicken wire,
leaves we should have cleaned off much earlier,
but it gave them better cover.

Then it started to snow.
A lot.
Very quickly.

The weight of  8.5 inches of snow was just too heavy.
Today my husband took care of the snow and leaves,
reconnected the wire and is working on strengthening
the top so this doesn't happen again.

The coop looks a bit unusual.
We're technically not allowed to have chickens
based on subdivision rules.
So we built a "tool shed"
I don't think it is fooling anyone,
especially with two roosters crowing! 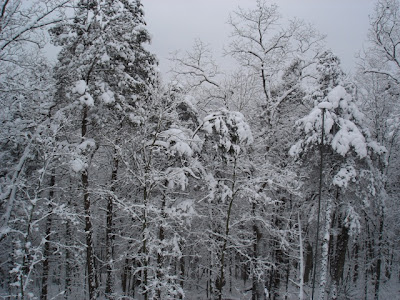 Our cedars were heavily weighted down.
I saw several large branches alongside the road
in front of neighbors houses.  I'm sure we'll discover some as well. 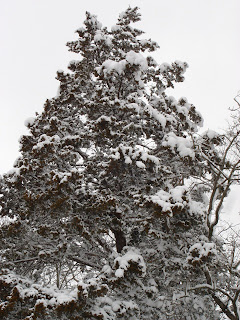 Although beautiful, I could do without this much. 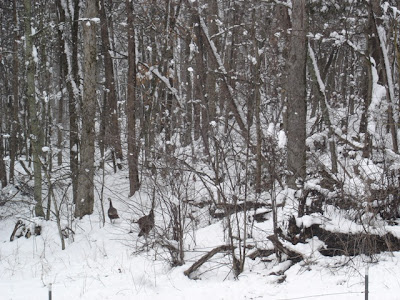 The turkeys were out and about, even in the snow.
They wouldn't let me get a good shot before
they ran off into the woods.

I'm hoping this was our last snow for awhile!

Sorry to hear about your coop. Sounds like your neighbors are being really good about your chickens. Hopefully this is your last snow.

Oh my! I am so ready for summer!

My brother keeps lamenting that he hasn't been able to do any gardening yet this year, as they keep getting snow in Michigan, too.
Stay safe and warm. ♥

The snow photos are extremely pretty, but we don;t get snow here, so I always enjoy the snow photos. Living with late snow must start get one really wanting spring.
Are you going to keep both roosters?
Love Leanne

Yes, they seem to have come to an agreement. The older one, a araucana, who is extremely henpecked, rules the coop and the young one (buff orpington)rules the yard. We only have a bit over a dozen in total.

If you come across any rooster eggs, I'll take a dozen.

Ouch! Guess maybe I'll stick to looking for the goose that laid the golden egg.