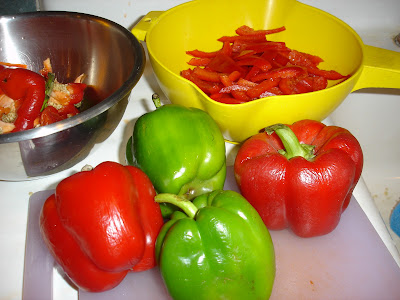 Bag of Peppers $1
Our produce market offers vegetables that are just past their prime at a big discount which means it's a good place to stop if we're in town running errands.  They have a bargain bin where peppers are sold for $1 per bag.  I forgot to count them but we purchased three bags and they contained 5-6 peppers each and they were big ones.  Comparatively, Wal-Mart's peppers were priced at $0.75 each  The grocery stores are often $1 each.

We don't mind a little age on the peppers because we're going to dehydrate them anyway.  I wash them, remove stems and seeds, and slice into 1/4 inch strips.  Our dehydrator suggests 125 degrees F until they are leathery- overnight is easier for us. 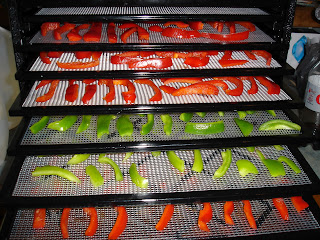 I filled up 6 trays with red and green peppers with scraps for the chickens. I held out a red one for dinner.

We had one disappointment and it wasn't in the bargain bin.  I also learned something about zucchini that I never knew before.  We were making a special dinner - see upcoming post- and needed a small zucchini.  Ours haven't come in yet so I bought (NOT in the bargain bin) a very small green zucchini.  It turned out it was so bitter that we had to pick it out of the dish- couldn't eat it at all.  I Googled  it and found that some zucchini contains too much cucurbitacin, a naturally occurring toxin, which will affect all the fruits on the same plant and can cause serious health issues depending on the levels.   Commercially grown zucchini has been selected for low levels of cucurbitacin so you don't often see it in the grocery stores.  I've never run into this before from a produce market.  Anyone have any ideas?

Posted by Kathy Felsted Usher at 7:50 AM

It's early in the morning, and I've already learned something new today. I'd never heard of cucurbitacin before. Hopefully this is a rare occurrence. You might mention it to the seller. I'm sorry your special dinner didn't turn out exactly as you planned.

Thankfully the dinner was still good. It just took one bite to figure out we needed to pick out the zucchini. I think it must be rare, I have never run across this before. I wonder if it's made worse by our drought and very high temperatures? I believe it was grown right here and not out of town.

Eating these vegetables caused severe stomach cramps and diarrhea that lasted for several days. These symptoms are similar to twenty-two cases of human poisoning by bitter zucchini reported in Australia from 1981-1982, and in Alabama and California in 1984. The variety of zucchini grown in Dodge County was 'Black Beauty' and the variety implicated in Australia was 'Blackjack.' Very small amounts (3 grams) of the bitter zucchini were ingested.

What should you do if you find extremely bitter zucchini in your garden? Well, you're unlucky since these plants are rare, but don't be discouraged. Don't eat the zucchini and don't give them to your neighbors! Discard them. Finally, don't save seed from plants that produced extremely bitter fruits. If you like to save your own seed, be sure to save fruit only from flowers that have been isolated to ensure that pollen came only from other domesticated, non-bitter squash and not from gourds or wild cucurbits.

Makes me glad we don't like zucchini. ;o)
Glad no one got sick! That is crazy.

Wow, thanks for that info! I have, luckily, never experienced this and I hope I never do! I will pass on the info to my squash growing friends too.

Great info! I have not heard that about the zucchini.