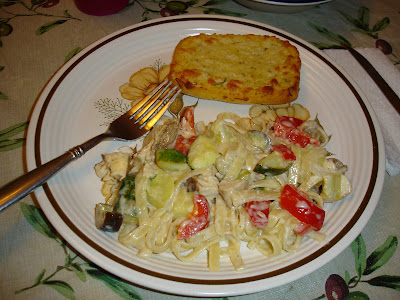 This is our Dinner Out- In.

On the very rare occasions that we go out to eat, for more than a pizza, we have discovered that things have changed.  Prices continue to climb and quality had deteriorated in most of the restaurants we used to visit.  There are a very few that have been able to keep up their quality while also holding prices as steady as possible.  Why are we going out when we can make something at home that is better for less money? 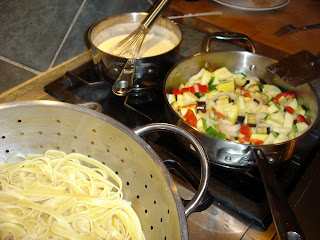 Tom's a great cook.  I used to be thin.
He whipped up some homemade white sauce.  (He is a very good cook, an expert at sauces, never letting them break. He's known for his roux which takes the patience of a saint).   He then sauteed vegetables and added pasta plus chicken breast.  I made the salads and we had some (store bought) ciabatta bread with cheese.  Except for the bad zucchini (produce market, not mine), it was wonderful and we will get three or four meals out of it. 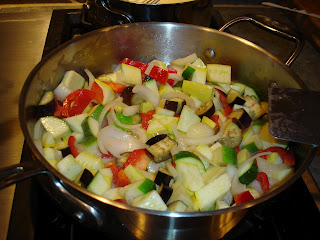 Onions, red pepper, zucchini (bad), plus my yellow squash and eggplant.
From  yesterday's post you will be able to see the terrible, horribly bitter zucchini that we had to pick out of the noodles and discard due to the high cucurbitacin levels which produce extreme bitterness. 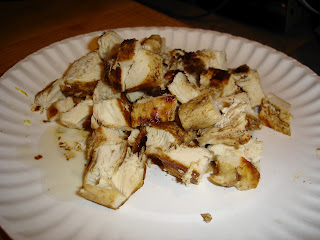 I don't mind doing the dishes- I can cook but I can't meal plan unless you want to eat in courses or have a casserole!  Even my boss tried to show me proper timing on his office whiteboard.  That's how bad it is.  Tom's better and everything gets done at the same time.  That amazes me!

Posted by Kathy Felsted Usher at 5:30 AM

I think the more we cook at home, the "worse" the restaurants are and they probably AREN'T any worse, it's just that our standards have been raised! :) Your pasta dinner looks fabulous!

My problem is that Tom loves to cook, and loves things that are fatty like white sauces. I used to be thin- always gave my food to the dog under the table because I only liked the vegetables. Now I like the pastas, the sauces, etc. Added lots of pounds since I was 22!