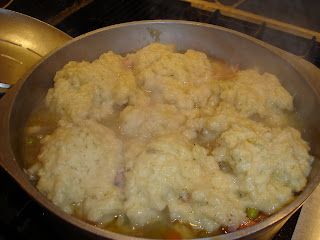 We're having turkey and dumplings tonight. After stripping the turkey and dividing up the meat among households my husband decided to make some stock. 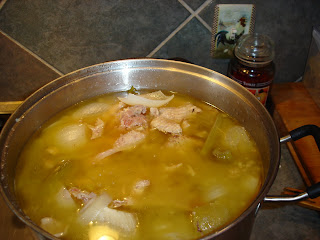 He included the celery and onions that were stuffed in the bird but added some extra for flavor. He used a large stock pot and added enough water to cover the carcass. It boiled for several hours until it tasted and looked done. Then he strained it and filled up the jars that we will freeze, making sure to leave plenty of head room for expansion. 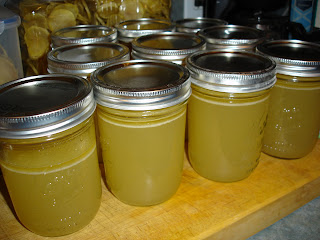 He used some stock for the soup plus added carrots, peas, cayenne and garlic. The meat that remained on the carcass after dividing up the families' portions is also in the soup pot. 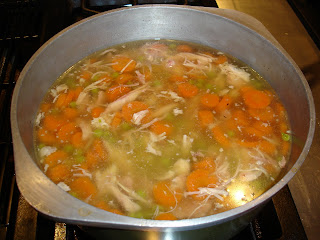 Sift flour, baking powder, salt, sage and nutmeg. Using a pastry blender cut in the butter as if you were making a pie crust until the texture is like course meal. Gradually add milk blending until the batter is like oatmeal. Drop dough with a wet spoon into boiling dumpling pot on top of the meat and vegetables. The soup should be simmering hard on low heat. Cover and simmer 15 minutes.

Now we're letting it rest, cooling down a bit before digging in. My husband will have his plain but Taylor and I have a small salad and cranberry to round it out.

The dumpling recipe is from The German Cookbook by Mimi Sheraton. book link
Posted by Kathy Felsted Usher at 6:02 PM

Well that was fast :-) Nutmeg and sage in the dumplings sounds interesting!

This looks so delicious! I would love to have a bowl of this right now. I am sick as a dog with bronchitis and this soup I know would make me feel better! Thanks for the recipe.
Lisa

Lisa- I hope you recover quickly!

This recipe looks easy and sounds yummy! My mother is of German decent and she always made dumplings.~Ames

We had turkey noodle soup last night with some of our leftovers. I rarely think about making dumplings, gonna have to remedy that! ;-)

I agree. The recipe does look easy enough I could do it and sounds yummy too. Thank your for sharing it.