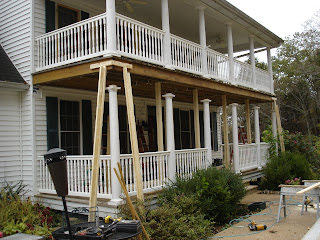 My husband discovered a sneaky leak that caused our main supporting beam to gradually rot away over the last ten years beneath the "wonderful" metal covering that was supposed to protect it from weather.

With cash in hand my husband ordered the replacement material which was delivered on our first really chilly day of the year, damp and cold. Fortunately, his friend and employer, Don, was available to work. It's a pretty big job, especially for a couple of old carpenters, nevertheless, they began bracing the upper porch so they could remove and replace the beam before the first heavy snows arrive. They lifted the porch by lifting the entire upper porch with hydraulic jacks. 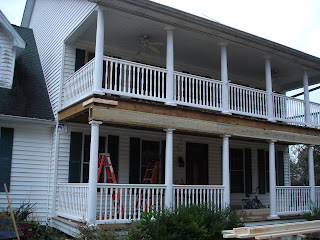 Several hours later I received a photo at work via e-mail. They survived and so did the porch. Still, there were several more hours of work ahead of them. 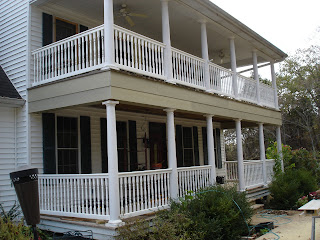 About 14 hours into the job, things were looking pretty good. The treated beam is now covered in fiber cement material which should prevent this from happening in the future. It still needs to be caulked and painted, along with the columns, but it sure looks better than the old covering. You can see how much damage there was. It still needs a good good power washing for both porches before repainting. The first floor porch ceiling and fans will need to be re installed (65 slats of ceiling to hammer in). Then, we should be good for awhile. Thank goodness my husband discovered this in time and was able to repair it so quickly.

Unfortunately he needed some oral surgery and subsequent treatment for the infection that set in so it laid him up for a couple of weeks. He's one of those tough guys that never complains- torn achilles (he splinted himself and worked through it), torn tendon in his arm that had to be pinned, broken ribs, etc. This one got to him- pain clear up the side of his face and into his head. How is it that I can tell he's infected but the dentist can't? Guess what, after a day on antibiotics he was feeling pretty perky!

Well, it got rainy and cold so painting is delayed which means my porch is still incomplete. Hopefully he can work on this next week because today is, afterall, opening day for deer season (gun).
Posted by Kathy Felsted Usher at 9:29 AM

That is nice work. Yeah covers are a double edged sword. If you don't seal it completely then the moisture just sits in there, and actually can make it worse. I've had that experience.

That's a nice porch, well worth the work! I'd like a big house with an old fashioned wrap-around porch. I don't know why you don't see those anymore that go the entire way round the house. No need for shade trees or awnings with those.

I'm hunting sheep right now myself. One anyway. He broke lose from a Muslim Mosque in town and has been eating every bush and flower in sight. He was too fast for me last night, but I'm a man with a plan. Stay tuned....

Sheep! Funny, I didn't think of you as a shepherd. I'd be stalking it too if it were eating my plants. We had the same thing happen with a little pigmy goat.

I love the porch and yes, we're in the woods and trimmed the trees so they wouldn't take out the house if they fell in a storm, as many do. They might brush it but nothing like you've seen on the news unless the storm launches them.

The porches are super expensive. My husband worked for a builder so to get anything larger than the little one bath place we had before, we moved out where land was cheap and of course the materials and labor were at builder prices and he put a lot of his own labor into it on the weekends since he is by trade a carpenter, especially talented in the trim area-fancy stuff and cabinet making that looks like furniture. We got something much larger for the same price as a normal subdivision home in the town we were in. Still, the porches add lots of cost. A full wrap around could be $40k, at least in this market with the decking, labor and the roof structure.

Tom thinks air conditioning has something to do with it too. People don't sit outside much anymore. We do, as long as possible. We build a fire and gather close if need be.

Good luck with the sheep- stew?

The picture of the porch jacked up in the air is amazing!! Glad the damage was caught in time!
Yahoobuckaroo cracked me up with the sheep story!

Didn't get to catch me no sheeps. I called the guy who runs the mosque and he managed to get it himself. It's just as well. Did you ever try to lasso a sheep? They duck and weave like prizefighters. I'd rather not let a sheep make a fool of me twice. Once was plenty.

LOL-I really wish I could have seen that.

Oh, that double porch is divine! What a dream!