And the Limb Came Tumbling Down 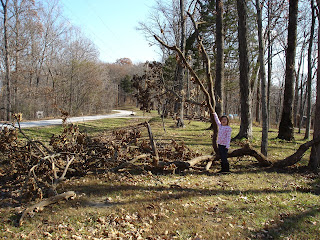 I knew it was a matter of time but I didn't know when that time would be. This amazingly large branch fell from one tree and became lodged in the top of another, way, way up there, higher than we could reach. I have been worried that it would come crashing down on someone so I am delighted that we had our windstorm last night. Down it came at the most optimal time, in the middle of the night!

Taylor spotted it this morning. She wanted to go outside and play but I kept telling her it was too windy. In years past it would be to avoid messing up my hair, but now it was to avoid the trees, something that has happened all too often in the past.

We live on wooded acreage and cut the trees back far enough to avoid the disasters you often see on the news, unless something launches them such as a tornado. I remember one particularly bad year after a terrible ice storm. We sat in the living room listening to the cracking and watching one after the other fall in the woods. We've had several blow down taking roots and all. So I am pretty cautious when it comes to dangling branches. 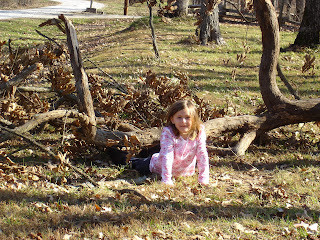 Taylor, of course, had to lay down pretending that she was squashed beneath the beast. Kids!

The husband is cutting it up now and hauling it over to the the firewood stash. Taylor is supervising.
Posted by Kathy Felsted Usher at 12:10 PM

How nice to be able to add it to your firewood pile!
Tell Taylor she looks pretty squished to me! ;-)

I will! She will love it.

I showed your post to my husband and said see they have fire wood. It worked He will be going with our friends to get fire wood . THANKS I love when my blogger friend are able to help. LOL

He, he, he! Good one. We live so far out that we take advantage of every piece. We've been without power in the winter for a week before and the only thing keeping us warm was living in the main room by the woodburner. It helps to have a friend with you. My husband and the neighbor start in the fall and take a day here and there to do nothing but cut and split wood.