My grandmother’s house smelled like an old house, but it wasn’t old. It was the smell of face powder, perfume aged beyond its expected life span, of rose water and glycerin, of mold and dust and all those aromas that mingle together to personify grandmothers.

My grandmother’s house was a treasure trove. She didn’t expect children to be seen and not heard. It wasn’t neat and tidy, a place where you sat with folded hands and napkins placed politely on your lap, talking in hushed tones so as not to disturb the adults.

In my grandmother’s house there was a miniature sleigh, a base fiddle, apothecary jars and fiestaware. There were display cases from the Rexall Drug where I used to be a master chef with all the ice cream and condiments a kid could hope for, or perhaps a princess being served whatever hear heart desired. She had all the things that kids dream of –candies, gum, soft drinks and comic books to take home after the day’s work. It was heaven to snuggle under the covers reading the latest edition of Archie, Casper or scary monster comics. There were dolls and toys and games, paper dolls, cards and stuffed animals. It was Candyland and Toyland all in one.

Unlike the red hat ladies, she didn’t wait until she was old to wear a red hat with her purple dress, to dress up for an Easter Parade . . . in the middle of winter ..or to plant silk flowers in her garden so she would have color all year. She wasn’t eccentric, that’s just how she liked it.

We had art class on the back of wallpaper samples. We would draw our masterpieces: landscapes and flowers, sketch ponies or our next ballroom gown. She wasn’t a packrat but rather a wardrobe mistress. We would dress up in fox furs and feathered hats to pretend we were movie stars strutting around Hollywood in our high heels. There were prom dresses from the 50s, purses from the 60s, jackets and pants, top hats and handkerchiefs, to dress ourselves . . . .or one of the mannequins that lived on the second floor. Hello Dolly.

Packages would arrive containing silly things: a 20 yr old National Geographic, a transistor radio –turned on and speaking all the way to St. Louis, a small shrubbery, news clippings about social events in town, pictures where she embellished her outfit with a little ballpoint pen, just to add that extra something. There would be old toys long forgotten from childhood, ribbons, costume jewelry missing a few stones, Kool-Aid packages and recycled harlequin romance novels. Crazy things that no one else would send -- and few would want. But that is what made it exciting. My children would call me at work urging me to come home quickly so we could open the package and see what curiosities it held. It was like Let’s Make a Deal. What would be in box #1?

By some miracle a stray cat came into her life when she was 99. Some said it was a bad idea and she should get rid of it. Some people were wrong. She found a companion, not a cat. A cat named Sugar that would walk to church with her, and wait outside until services were over and then walk her home again; a cat that would meet her at the curb when she had been out running errands, a cat that would sit with her daily and caress her cheek or rub her legs, a cat to talk to when she was lonely or feeling down. The house was no longer empty, filled only with memories of times past. Now she wasn’t alone. My grandmother found a perfect friend. We should all be so lucky.

So when you remember her, don’t think of her as the eccentric lady down the street but as an adventuress or maybe an actress, a designer or perhaps a playwright creating her own world of imagination and creativity that makes my structured world pale in comparison.

Who will do this for future generations? I’m certain I am not quite so clever. 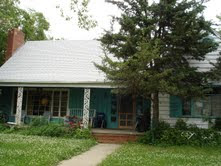 My gosh, this was such a great read, a loving tribute. My own heart ached with love while I read this. She must have lived a good, long life. May she rest in God's peace.