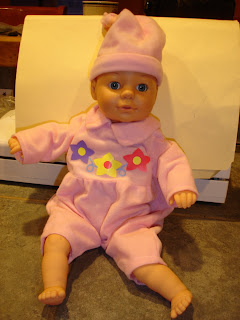 Rosalina was mauled by a dog, her condition critical, and no one who knew cared to help, nobody but Doctor Pops. You see, Rosalina is a little doll- really, a plastic and fabric doll loved and adored by my granddaughter, Taylor. They were inseparable, sharing the joys of life as well as fears and tears until the day she was inadvertently left behind at her dad's house where the family dog, believing she was a puppy toy, grabbed her. She chewed and thrashed Rosalina back and forth until the doll's tiny arms and legs were nothing but mangled stubs.

Knowing Taylor would be devastated, her father said that Rosalina was simply misplaced, managing to put Taylor's inquiries off for almost a year. He didn't try to repair her or even think of throwing the doll away; rather, he put it in the back of a closet where she remained hidden until last week when Taylor's world was shaken as she discovered Rosalina's brutalized body and realized the deception that had transpired. You might think that a six year old would not have enough worldly experience to understand betrayal, but as she recounted the story to me she expressed this in a very adult like manner. To make matters worse, she knew her mother was aware of what happened.

Taylor told us that Rosalina was back at her apartment so I asked her mom, my daughter, to bring the doll to us. We would find a way to repair the doll come Hell or high water. Taylor said she wanted only Rosalina, not a new replacement. If we couldn't repair her, Taylor would keep the damaged one.

My husband, Pops to Taylor, spent several hours on various doll part sites. At one point he took a break and called me at work. "If I get any more womanized I think I'm going to shoot myself," he cried. "I can almost smell the potpourri in the air!" No luck on the sites. Taylor remembers every detail about this doll, even how the hands were positioned. He'll have to check for a similar doll at the stores.

By the time I returned from work my husband had purchased a suitable replacement that was only slightly different in the body and head - which we did not need. I put on my nurses outfit and prepared the doll for surgery. Dr. Pops had already carefully removed both arms and legs from the donor doll. Now it was time to remove the damaged limbs from Rosalina, much more difficult than expected requiring scissors, pliers and brute strength. Soon I was ripping seams and inserting the snap ties that the manufacturer used to secure the limbs. Dr. Pops expertly fastened and tightened until the patient was ready to be wheeled into recovery and fancied up in a new pink outfit.

I took a photo and Pops called Taylor asking her to have Mommy check her e-mail. Much to her delight here was Rosalina good as new. Pops spoke to Taylor on the phone relaying a message from Rosalina who mentioned that dogs make her nervous now so she wanted to stay only at Taylor's place, or ours.

Dr. Pops is magic to Taylor. He is her hero. Mine too.

Don't forget to have my cape pressed at the cleaners tomorrow.

Great story. Kudos to both grandparents for the Herculean task. Always good to see a happy child. :)