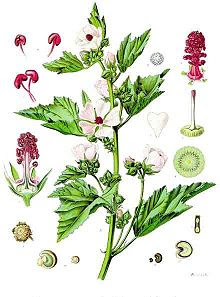 “Tom, Dan,” their Dad yelled, excited as a kid on Christmas. “ Hurry, you have to see this!” The teens stampeded down the hall, around the corner, sliding into the family room with anticipation. Television’s Aaron Mermelstein is reporting from a marshmallow farm during the spring harvest, the tiny puffs dangling from bushy branches awaiting a little pluck before being transformed into packets of sweet treats.

“I always wondered where marshmallows came from,” he says wide eyed and full of awe. The two boys just stare at their dad, shaking their heads with that “You Gotta Be Kidding Me” look. “Dad,” one of the boys says, “It’s April 1. April Fools Day. You know that, right?” Right. One of the best April Fools Day pranks compliments of St. Louis television sometime in the seventies.

This may not be an exact recreation of the event but it conveys the flavor; however, as it turns out, the joke may be on us. The herb, Marsh Mallow (Althaea officinalis), similar to a holly hock, was used to create a sweet Middle Eastern treat, the precursor to the modern marshmallow. The roots and leaves can be consumed as vegetables in addition to reported medicinal qualities of the flowers, stem and roots aiding the kidney and colon.

There are many plants that are essential to survival. These are plants that grow wild, native to the area, the ones that medicine women would have gathered for their healing qualities or that would first poke their heads above ground in the early spring saving settlers from starvation. They are also the ones you should have in your garden, if you live in the country, city or even an urban high rise. There is always a way to grow a little something be it peppers, tomatoes or just a few herbs on the window ledge. As prices soar every little bit you can put away will help.

We’re planning our garden now, scanning the seed catalogs in print or on line. We purchased a Victory Garden seed collection a couple of years ago,open pollinated seeds not subjected to genetic engineering and hoped to avoid cross pollination with a neighbor’s. My picks are:

Tomatoes- heirloom. We plant as many as space allows. Some are for eating fresh, some for saving. We have dried them into beautifully opaque wagon wheel crisps but most are canned into sauces or salsa. Tomatoes provide vitamin C when other fruits and vegetables are not available. It can prevent Scurvey- yes, I know we don’t get this anymore here in the USA, at least not today. But you never know about tomorrow. Just file the info away, it might make a great trivia question one day.

Green Peppers- same as tomatoes. Chocked full of vitamin C. Chop them into salads, eat them sliced with a little Ranch dressing, pop them in the oven filled with meat and spices. Dry them or freeze them.

Greens: collard, turnip, spinach and mustard. So many vitamins and so good for you. Mix them with tomatoes, add a little bacon or drizzle with vinegar. These are both early and late season crops but some varieties do well in heat.

Beans- bush varieties when space is limited, great for planting in a large pot on the deck. Boil them for a quick side dish or just snap them in small pieces and add to your salad for an extra added crunch.

Tobacco plants are amazingly pretty with flowers as beautiful as an orchid. We grew two varieties both grown in Missouri at one time. We don’t smoke so we never dried it --despite the pleas of my brother-in-law. It is large and must be hung to dry out of the elements which would require some type of shed. It grew well and one never knows when it would come in handy.

Herbs: my top picks would be basil, sage, rosemary, thyme and chives. Here is one you probably didn’t expect: Don’t kill the dandelions- make sure it is a true dandelion- with one single yellow head on the stalk. They are one the earliest greens, tender and fine for salads. My first introduction to dandelions as something other than a weed was back in my old journalism days. An elderly lady, Mrs. Hosenfelt, offered us her homemade dandelion wine as Tom and I were sitting in her log cabin discussing the history of her farm. I also found a recipe for an interesting dandelion pasta that I may try next spring.

There are other medicinal herbs that I will stock, although I have not experimented with them. We have books that explain processes and a chemist friend to help us if it ever came to that but some of them can be dangerous if not handled properly. That doesn’t mean I won’t grow them and save the seeds, just in case. Many are decorative and will look beautiful in the flower garden. Someday I would like to make a dedicated Biblical herb garden when I have a separate area. This would include plants such as chicory, mint, oregano, mustard, bay, coriander and hyssop.

Oh, the marsh mallows, I’m thinking about sneaking some seeds into my father-in-law’s planter bed this year. Keep it our secret!

I wish I understood about plants and growing stuff. I started gardening last year, in order to get one with nature. I had been frightened of the garden up till then. Ofcourse, my garden is more of a patch of land, than a piece. I planted three Hydrangeas and three Clematis plants. The hydraengeas all died after I put weedkiller down, forgetting it would not only kill the weeds......

The clematis faired much better. They were in pots and still flowering into Decemeber! The snow seems to have killed them though. Never mind, I will start again, but the plants need to be tough beggars to survive living under my care. I eat loads of tomatoes, literally I could eat ten small ones on a slice of toast with salt. Infact I am going to eat some for lunch! That's a plan.

Where I used to live, infact just around the corner from there, a lady called Edith Blackwell Holden was born, in the late nineteenth century (before me...). She wrote "The Country Diary of an Edwardian Lady."

Your wiriting reminds me of her's, the little details and your photographs. She used drawings ofcourse, in those days, etc. I think she is famous world-wide, so you may have heard of her?

I am far too clumsy to be artistic. Being left handed with poor eyesight doesn't help, but I appreciate other's skills. You make dandelions sound like our friends! That's a gift, that is.

Thank you very much, that was nice. I think my favorite literature is along the lines of English country manor mysteries although I am just finishing up a book my mother loaned me entitled The Help. It is about maids in ultra segregated Jackson, Mississippi in the 60s.

You might enjoy something call Square Foot gardening, Google it- it's not the foundation but rather the method. You raise your beds slightly and plant in square foot sections. A foot at a time is much easier to manage than an acre at a time! It should give you plant suggestions and placement to maximize your output from fewer plants. Pick no fail plants- I should talk! I can grow just about anything outside but kill everything indoors.

I have been reading you off and on through Tom (Catawissa), Mary Christine or Cheeky Pink. I didn't follow for a long time, not being part of the blogging community until recently. I am still unsure of the proper etiquette.

Square foot gardening sounds good to me. I can picture it in my head too, which always helps. Thanks for the tip.

"I am still unsure of the proper etiquette. "

Well, I've been known to turn up and blog whilst drunk, so don't imitate me for heaven's sake (literally heaven's sake)!

You should be pretty safe with Mary Christine, as an example of blogger's etiquette. She also wears proper attire, dresses and such like. I'm still in my pajamas on the bottom half of me and a scarf and cardigan on the top part. I look like a bag lady probably. In between blogging, I'm cleaning out my fridge, all the old Christmas left overs, yuk! I'll shower when I'm done.

However, re the main defect of character, I'm behaving myself at the moment, that's why you will have noticed my own blog posts are making complete sense ha-ha-ha! O.D.A.A.T.

In oother words Kathy, just be yourself, that's who we want to meet, after all.

My flower bed has been overtaken by dandelions and mint. I didn't realize that mint would become such a problem. I didn't even plant it! I think it creeped over from a neighbor's garden.

Last year I grew a potted tomato, chile, and cilantro. I called it my salsa garden.