Monsters in my Tub 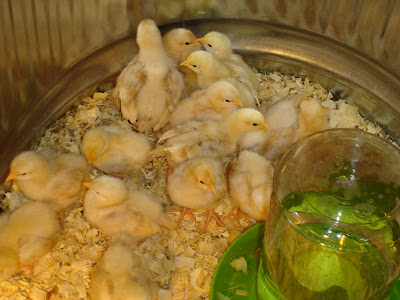 Just when you think everything is fine
Monsters invade your tub !
Everyone is on alert.
They all run to one side of the tub
and more often than not, hide beneath each other
until they are just a mass of yellow fluff. 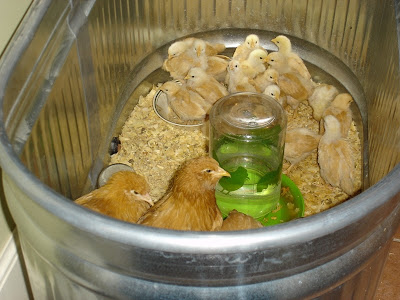 Spring was wet and cold with flooding
even closing down interstate highways.
Summer only a season on the calender,
wet then dry but cooler than normal.
Then the wall of heat hit setting records.
The heat index was something like 104.
It was so hot we lost two of the youngest coop members,
one a rooster and the other a pretty buff.
Fortunately I could save Miss Puffy cheeks and two siblings. 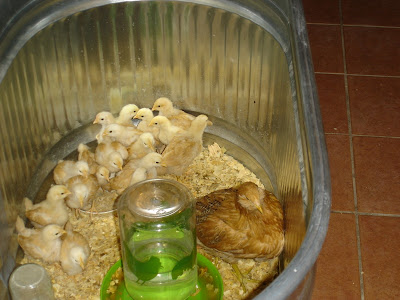 The older hens were fine but these younger one
were not ready to take on the full grown hens,
in fact the group right before this didn't fully integrate
but they have no choice now, they are fully grown.

These girls had to come into the house to cool off.
They can't go in with Bird, they would peck his/her only eye.
So our choice was  to put them into the tub with the babies
for a couple of days.  Monsters to the little babies!
I will say these older birds have been very patient
although they give the little ones a peck now and again,
nothing dangerous, just warning pecks.

About half of the babies will  be gone
by Monday-  going to my husband's boss to boost his layers.

Miss Puffy Cheeks,  sitting in the tub above,
still remembers to fly onto the edge of the tub
so  I'll take her out to sit on my lap.  She's
the sweetest ever and I'd love to have her be Bird's companion
but I am too worried about his eye.
Maybe I could sew a patch for him/her.
I'd have to come up with a good pirate chicken name!

It won't take long for them to get big, they will be ready for winter. They sure grow fast. You have a bunch of them for sure.

Oh they are soooo cute! It seems the others are very well behaved also...lol. I'm sorry you lost two of your flock members....I always hate that. Enjoyed your post!!

Heat is tough on animals. I think birds are even more susceptible to it. I'm not sure but I don't think they can sweat to cool off.

Very cute 'monsters' ... such WEIRD weather this year. Oh such an idea about a pirate's patch for your poor deformed/much loved bird. Good luck with the transitions.