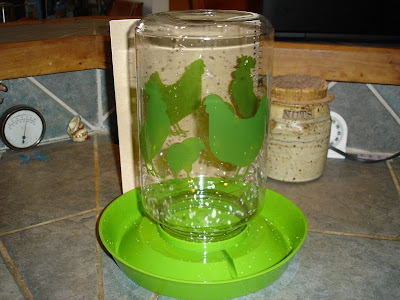 I wanted to share my new chicken waterer for my Special Needs Bird.
As some of you know, he not only has a crossed beak, but is also
missing one eye and blind or severely visually impaired in the other
which means he has a difficult time finding and drinking his water.
Every morning and evening I make sure he drinks from an eye dropper
after he has his meal. 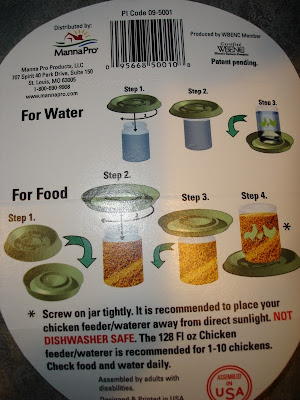 This feeder/waterer is convertable.
Depending on which side of the base you use it can be used
to feed or water, plus it is large capacity rather than the
mason jar waterer we had been using for the chicks. 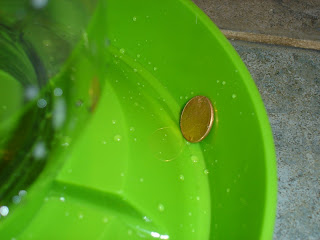 I placed a penny in the dish to give you an idea of how deep it is.
This is very important for my chick since he needs to dip and scoop
to be able to eat or drink. 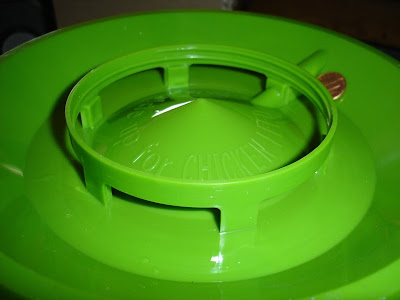 The flip side is the feeder.
Again you can see how much more shallow it is by the penny. 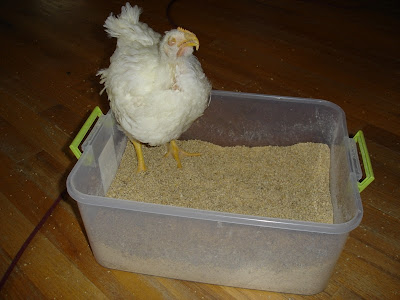 I would like to say I've been more successful, but I have not.
It has nothing to do with the product, when I assisted him
he was able to drink easily; however, being blind he does not
always "get it."  He also has a skull deformity which may be
contributing to the problem. He has stopped his seizures but his one eye has changed,
becoming bulbous and cloudy.

He is fed in a plastic tub which is deeply filled with food
since he has to scoop it into his beak.
He hasn't grown much, other than get fatter and
has enormous monster feet that get him in a world of trouble.
I have to get a new feeding tub because he now steps
out of it and walks all over the living room.
Once he made it around the breakfast bar,
past the chairs that line it
and into the kitchen to find me.
Here he came around the corner,
strolling into the kitchen as if it were normal.
I just know he was saying
"Help me Mama, I fell out of my tubby!" 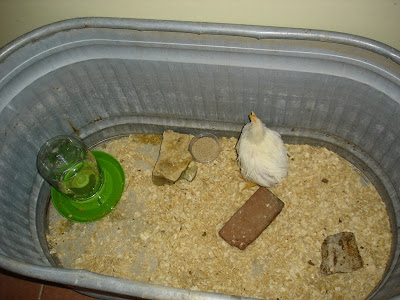 I suppose he is now a house chicken.
I guess I'll have to find out if anyone else has a house chick
or has my mom's worst fears come true,
I've become Elly May, as in Clampett.
The next thing you know I'll be installing a CEment pond out back.

I give him some rocks to perch on, which he loves,
a little dish of food just in case and then his water.
When we have our new hatchlings he will once again have company
and someone groom him and keep him warm and snuggly at night. 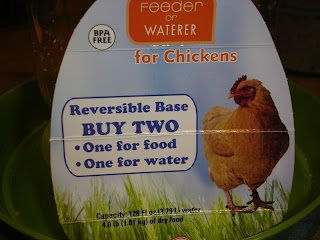 Just keep the birds away from granny and jethro.
An amazing story!

Oh my goodness. You are such a special mommy for this precious chicken.

Definitely looks like a good feed/water unit.
He gets around pretty well then.
*hugs* & hearts;

You're a good soul, to do so much for the unlucky chicken. When my daughter lived at home, she used to bring the abandoned or injured biddies into the house. I would squawk and fuss, but she just ignored me. One of those chicks, whom she named Chick-E, grew up to be the fiercest , most evil rooster I ever saw. Even my dogs were afraid of Chick-E. But my daughter could pick him up and pet him and cuddle him. Chickens aren't as stupid as people think they are.

The story of him coming to find you is just too sweet! :)

We had a calf in the house for almost 2 months one time - a chicken is way easier. Does he have a name?
He must just love you.
Smiles

I just love him!