The Girl Makes the Soup 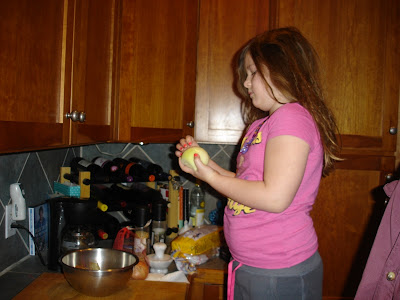 A little chicken soup is a good thing,
made by an 8 yr old is even better!
Especially if it's full of dumplings in the end. 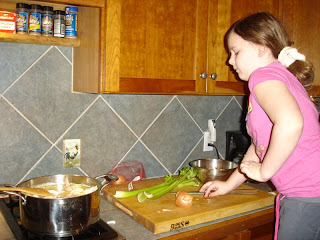 She hates regular canned chicken soup,
and hates onions
and peas.
But loves them in the chicken and dumplings
because it's homemade
and tastes like real food.

Pops is the cook around here
and Taylor had her first lesson:
proper knife handling,
onion peeling and slicing
chopping the celery
and putting them in the pot properly
so they don't splash hot water all over the place.

In the pot they went with the chicken,
cooking for hours until it was time to
strain everything out.
It was a family affair
I picked the meat off the chicken bones,
and Pops added fresh vegetables
and made the dumplings.

For a girl that doesn't like canned chicken soup, she had two helpings!
By summer he'll be teaching her the art of Bar-b-Que.
It's a good thing, I never learned to cook when I was young
and while I might be able to cook basic things now,
I'm terrible at meal planning (so it all is done at the same time)
In fact, you'd better like to eat in courses with me at the helm.

How old were you when you were taught to cook?

I was the oldest of a big family so I started young. My first memory is peeling potatoes at about 5 years old.

Nice! I didn't learn to cook until I was an adult. My mom hated having people in the kitchen with her.

I'm glad she is learning to cook AND enjoying it! :)
I started learning when I was about 12. My family suffered through many meals of me "learning!"

I didn't learn how to cook until after I married my husband! I do mostly basic things, too. He's the fancy one.

My mom burned the flesh right off the inside of her left palm after placing her hand on a pot belly stove when she was little. It left a big indentation in her hand for life. Didn't stop her from cooking though! Her favorite dish was squirrel brains. No lie. But she only ate it down home in Tennessee because her brother was the only squirrel hunter in the family. She learned to cook very young though and was one of the best old fashioned country cooks around. She used bacon to season just about everything it seemed. She used to cook small golf ball sized potatoes in the same pot with a beef roast so the potatoes would suck up the juice and that sort of thing. Best potatoes ever.

Great for you mom! I should have, I never even had to take Home Ec.

But based on what I see now, you sure did well.

Yes, I imagine we will too. Her mom's work schedule is crazy so we'll probably be teaching most of the cooking courses. She frosted her cupcakes over Christmas and I'll say she needs some practice - stingy frosting girl!!!

Me too! He still can't believe I don't know how to do a lot of cooking things. I'm better at cleaning up.

Bacon makes almost everything good, really. I don't know about brains. I've seen them on menus and I know people eat them but the texture may be just too much for me based on what I hear.