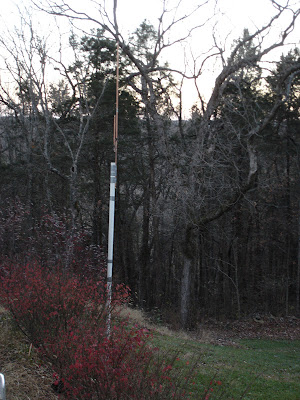 My husband built a homemade antenna for his ham radios.
Keep in mind, I am not a geek so I'll describe it as best I can with his help.
This is a J-pole which is a half wave/quarter wave antenna, which is one of several types.
You have to calculate all sorts of math stuff in order to come up with the best antenna to resonate at the frequency that you are trying to work.  Again,  I'm not geeky so I hope you're following.
This will allow him to broadcast much farther than he was able to with the smaller antenna.

He started with 10 ft of half-inch copper pipe, 1/2 inch copper Tee, a 1/2 copper 90 and three 1/2 copper caps.  There are some copper clamps and pvc pipe plus 50 ohm coax cable.  The pvc pipe is a 10 ft piece he had laying around the house.  He soldered everything together.  He had to do all sorts of adjustments to make sure he would not damage the radio with the the power he was using.  It's sort of like getting a clogged pipe that can leak back into your house and destroy it.  The same for the radio and electricity.
Then he and drove a t-post (fencing) into the ground and slipped the pvc pipe over it.
He drilled a hole through the foundation and connected to the radio.
In between all these steps are again lots of geeky stuff that had to be checked and adjusted.

All in all, he's been able to transmit 30-40 miles whereas his smaller antennas might get that distance  but not in the same direction (toward the city) due to whatever interference would block the signals.

If he decided to put the antenna on the (very tall) roof someday, he'll be able to reach even further, especially since we're on the ridge top. 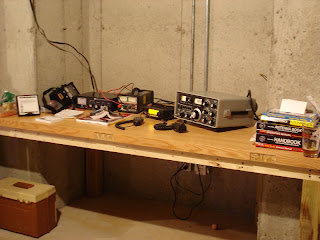 This is the new radio shack in the man cave (basement).  The table is made from an old door that was being thrown out on the job site.  It fits perfectly in the alcove created beneath the first floor fireplace.  He will add shelves for additional storage. 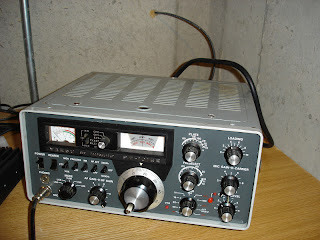 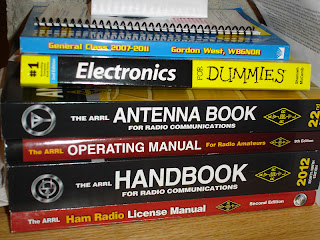 Just a few of the books he has.
There are many, many more.

And, with one simple turn of the chair, there is a pool table, and the stereo and a fridge with beer.
What a coincidence!

And kids wonder why they need math. ;o)
Good on your husband. That is awesome. :o)
Thanks for the look into this corner of your life. Have a blessed weekend! ♥

You know, Linda, I was one of those kids. I absolutely sucked at math in school, mostly because I never saw the point. There was never any real practical applications. Then I grew up and became a carpenter. Suddenly I was using math all the time. Figuring rafters, stairs, cabinet dimensions and the like. Thinking backwards and upside down, applying numbers to everything, mostly in fractions, using formulas and common sense.

Now I'm an old guy that absolutely loves math. I just wish I would have paid more attention when I was younger because I wouldn't have to spend so much time now learning the things I should have learned then.

As I've given this some thought I've come to the conclusion that it's precisely the lack of real world application in our education system that causes so many of us to hate school and then to do so poorly in it. Had there been some sort of combination of math, science and shop class I would have been a genius. If they'd have shown me how math and science applied to engines I would have learned everything there was to learn about all three. But that's not how our education system works.

It seems like we're using school to train good little employees more than it's being used to supply a well rounded education. It's all an assembly line, production and efficiency based experience. Each station is segregated from the others. The students (employees) are given just enough information to do the specific work required for that station. There's no attempt to explain how that station relates to others or why the things done there are absolutely essential to the whole.

And just like a factory the efficiency is good for the company (schools) but it creates a bunch of mind numbed robots that only know how to do a narrow range of functions. They haven't learned to think in terms of the whole process, only the particular function.

The well informed employee can benefit both himself and the company. If he understands the process and how his particular part of it fits into the whole then he can think in terms of the whole.

This is true for students also. Without context math, english, science - whatever, become pointless exercises in futility, disconnected from his life and his needs. He has no way to put them in context and understand why they're vital to everything else.

Awesome! I know nothing about geeky stuff like this, but it is cool! My grandpa used to be BIG into ham radios. There is a room in my grandma's basement that was his "man cave." It is just like he left it and I go in there every once in a while to look around. It's almost like I can feel his presence in there with me :)

Thank you for visiting my blog today! I would love it if you would to join me at the Clever Chicks Blog Hop weekly if you can make it! http://www.the-chicken-chick.com/2012/11/clever-chicks-blog-hop-7-country-craft.html

I hope to see you there!
Cheers!
Kathy Shea Mormino
The Chicken Chick