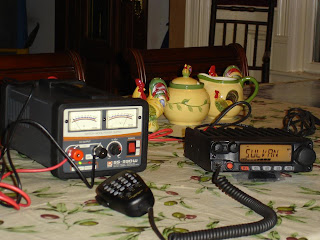 We were jarred awake at 2:30 AM by our Midland WR-100 weather radio as another severe thunderstorm warning was issued, fortunately just skirting our immediate area but bringing up to 2 inch hail to many communities. This was part of the horrific storm system that went on to generate tornadoes that hit Tennessee, Indiana and Alabama. A couple hours later I was up preparing for the drive into work, watching radar to gauge my departure time as I would be driving smack dab into the heart of it if I left on time. I had the television radar in addition to up to date information provided by storm spotters.

As many of you know we have been part of disaster preparedness activities through the CERT program but most of you might not know that my husband, Tom, went on to earn both his Ham radio technician and general ticket. Additionally, he is now a trained Skywarn storm spotter through the National Weather Service. I thought I'd let him guest post about it. 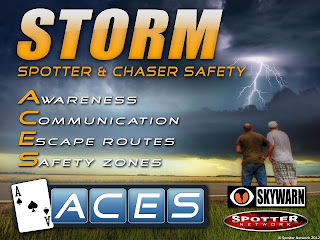 I spent the morning sitting at my 2 meter radio as the storms rolled through. I was monitoring the Skywarn net that comes up on a local repeater (frequency 147.240 - repeater WAØFYA) to help the National Weather Service (NWS) understand the weather conditions in specific locations in real time. It was interesting because every once in awhile I get to see behind the curtain and learn how something we all take for granted actually works.

I took a class a couple weeks ago to become a Skywarn Storm Spotter. The meteorologist that taught the class stressed just how important on the ground reports are to the NWS because radar can only give them part of the equation when it comes to forecasting dangerous storms. They need to know, in real time, where hail, winds, lightning and even tornadoes are actually causing damage so they can verify the predictions they made and then extrapolate the information forward to warn people in the path of the storm.

The NWS uses ham radio operators and the nets we bring up to stay abreast of the storm. (Networks were part of the radio communications world long before computers came along.) Hams from around the area check in with the control operator and report any occurrence of violent weather phenomena. The NWS then contacts the net via radio and asks for general reports or specific reports about conditions. As the storm went through I would hear the NWS (WXØSTL) contact net control and ask if there was anyone in a certain area (Marthasville, for instance) that could give a report because their equipment was telling them that the storm should be doing something and they needed verification of it. If need be net control would step aside and allow the ham to talk directly to the NWS operator.

And then, a minute or two later I'd hear our local TV meteorologist repeat exactly what one of our local hams had reported. So I'm guessing they're monitoring WXØSTL to stay up to speed as well.

Anyway, it was an interesting and informative morning. I learn something new about ham radio and its uses every day. By the way, I passed my test the other day and I've got a General Ticket now which allows me to use just about all the amateur frequencies. Now I just have to figure out how to afford the gear to do it.

In addition to being a storm spotter Tom is also a member of ARES, which is the Amateur Radio Emergency Service which provides an alternative means of communication during emergencies. The ham guys get together a few nights a week, on-air, to practice using the network. This is primarily plain language communication but Morse code could also be used because it requires less bandwidth to transmit and travels farther. That would be a last ditch measure because they are able to transmit digital files via the ham radio. Specialized versions of Word and Excel can be transmitted over the air using digital packets, the same technology that is used for the internet. Ham radio operators come in handy when first responders from different areas come together during a disaster since they are not always on the same frequencies. This was used in Joplin, during Katrina and during rescue operations in Haiti after the earthquake. The hams have fixed procedures in place to accurately record and re transmit to prevent the message from being inadvertently altered.

Yes, it is getting pretty darned geeky around here, beeps and disembodied voices drift through the house and there's lots of gear talk- a mobile radio that functions as a base station plus his FT270-R waterproof handi talkie radio which accompanies us in the car. Being waterproof it will also be useful on the river this summer.

I'm supposed to be studying for my technician ticket so I will be able help out if we ever find ourselves in a real emergency situation so I guess I should get busy reading the book and taking the on-line practice tests. 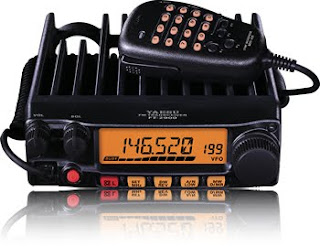 Glad you're okay.
Lots of neat information here. God bless you both and good luck on your certification.

Please be safe Kathy! The images on the news tonight are so frightening and heartbreaking. Praying for those who have lost everything in the tornados and those who are in the path.

Lisa
The Way Grandmama Does It

Kathy,
I agree with Lisa's sentiment and you are in my prayers dear. I am so glad that you and Tom are learning such vital emergency communication skills. Stay safe.

Couldn't sleep due to the weather in our area this morning, but found this an interesting read. Thanks for sharing!

I'm glad the storm missed you guys! Yikes! What an important role Tom plays in keeping the NWS informed with real-time data!

I am sending this to my dad. He got his ham radio license when he was about 16 after he and his brother built a radio from scratch. He'll enjoy this.

I don't do the HAM radio thing, but I have two short wave radios, one an old $300 Grundig and the other a less expensive Radio Shack model. I find them most useful during times of war where I can get broadcasts from Europe without things being filtered through the USA news networks (where I'll only hear what they want me to hear).

As to the weather, it's just like last year when we also got out March winds in February and our April/May tornadoes in March. I hope the hot summer won't be replicated!

That's what Kathy and I were just talking about. Sooner or later one of these super cells is going to get into an urban heat island and start to feed off it and when that happens it's going to get ugly.