Clouds, Blooms and Things That Go Peep in the Night 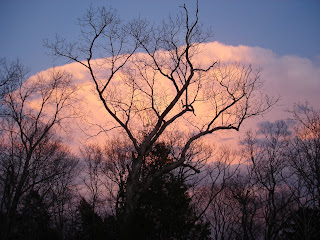 Imagine, 85 degrees in March! Something's up! Look at these clouds, very pretty but not normal. 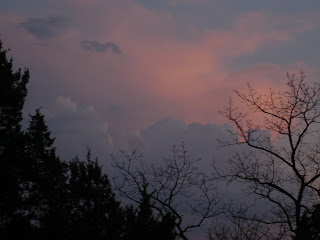 My husband's ham radio announced the possibility of bringing up the skywarn system. It seems that south of us, in Pevely, MO, there were reports of quarter sized hail. From our deck we can see the storm clouds in the distance. So far, so good here! You have to look closely at the clouds, the sun was beginning to set. 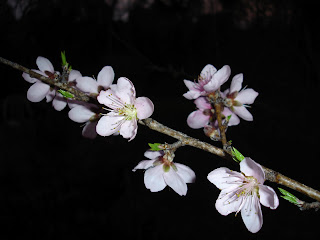 Just in case we get a hard rain, and we will get rain the next couple of days, I decided to take some photos of the flowers that popped open today. This is the peach tree. They never get very large but small as they are, they are pretty good, if you get them before the critters do. 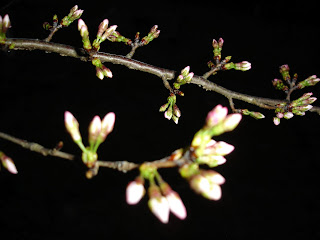 They make fun of me for planing a non-bearing cherry tree. No, it's not like planting non-bearing corn. The tree is next to the patio plus near the WHITE handrails and siding. I don't need cherry stains here. The flowers are pretty when they have opened. 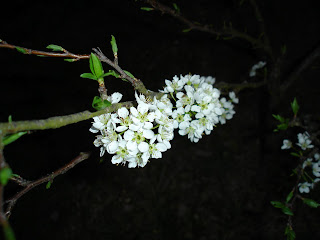 Then there is the dwarf plumb. We had a few the first year but last year it blossomed and then we had a freeze. It won't surprise me if that happens again this year as early as it's bloomed.


Now the night creatures- the peeps in the dark and music to my ears. In a few weeks the noise will be deafening. You will hardly be able to hear each other speak. Enjoy!
Posted by Kathy Felsted Usher at 8:55 PM

Those clouds look like summer thunderstorm clouds instead of springtime clouds!! I can just imagine how loud all your peeps will be here in a few weeks, thanks for sharing that! :)

Your 85 degrees makes me jealous. So do those lovely blossoms. That sunset is amazing too. wow, the peeps in the dark are sure pretty and loud. I envy you Kathy. My crowd noise are trains and cars 24/7. Lol. Have a great night.

The pictures look lovely. I am worried about my trees too. They are in bloom and we will be getting snow in the next two days. I am going to try to save them by covering them in plastic.

I am no expert but I heard that plastic can hold the cold moisture in but cloth will protect the buds. I'd look that up though. I used to drape sheets over the flowers and it usually worked. The yard looked interesting too. LOL

Come on out to Missouri- there's a lot for sale up the way with lake access- a small lake but there's a little island on it covered in mimosas, there's fish but not big enough to ski . In fact, I don't know if people typically use anything more than a trolling motor. The fire dept uses it to pump water into their trucks.

Thank you, I always enjoy yours too!

Strange weather we've been having, even winter wasn't so bad. Now, will summer be dry and hot or cool and stormy? Well, they say this about STL, if you don't like the weather wait 10 minutes, it'll change.

My wife and I sat out last night and watch the stars and listen to the peeps! So relaxing and you really realize that there is a Creator!

I saw big fat bumble bees out yesterday.
Here's hoping you do not get any serious weather out there. We've had enough for a while.
Have a blessed day!

It certainly is strange weather. I can't think that it will be good this summer. Love the blooms!