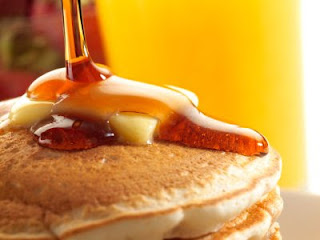 Things that are good in life are worth the wait! We had fairly nice weather yesterday, at least compared to how terrible it has been so far this year, so we decided to take advantage of it and boil the sap we collected from our maples. Notice we are still sitting on two inches of packed snow and ice! 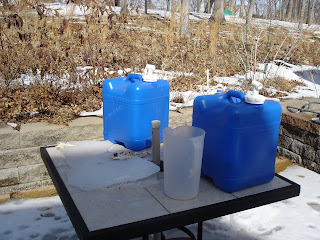 This is a long process. Not difficult or even requiring much activity, other than waiting. Truly, watching a pot boil, and boil, and boil. You get the idea. We started with two 7 1/2 gallon jugs which eventually boiled down to almost 2 pints- yes, almost! The ratio is 40:1 sap to syrup. 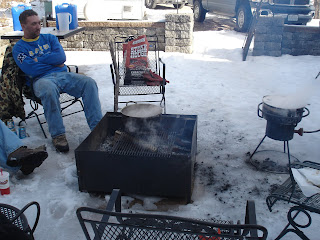 Here it is, the boil. We had one wood fire and one turkey fryer set up so we could cut down the time needed to reduce the sap. Normally this is started just after dawn and we're still boiling after dark. One of our neighbors tapped his trees too so this was a group effort. 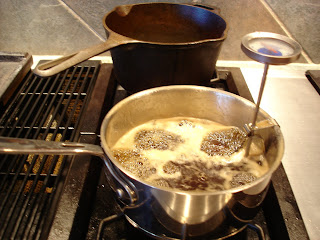 We finally reduced the 7 1/2 gallons down to one pan, pictured here. We took it in indoors and finished it up there, monitoring the thermometer so it would not suddenly turn to candy or sugar,which it can do in a heartbeat. You should not perform the entire procedure indoors due to the amount of moisture that is released in the process. I assume your kitchen would be overwhelmed with water vapor, in fact 39 gallons of vapor if you produced 1 gallon of syrup. 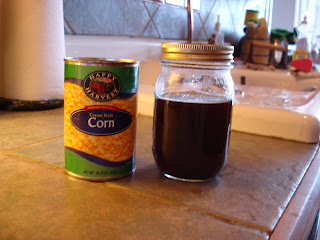 The end result was two pint jars not quite filled to the top: one for us, one for the neighbor. This batch is exceptionally dark with a higher sugar content. I placed a can of corn next to this for comparison. We'll continue to collect sap and produce more syrup as long as the temperatures cooperate. Last year we produced almost a gallon, far more than we needed so we sent some to family and friends. We also froze a few jars. It never froze solid which made it easy to scoop some of the sugary goodness out and drizzle over ice cream or top off a sopapilla. 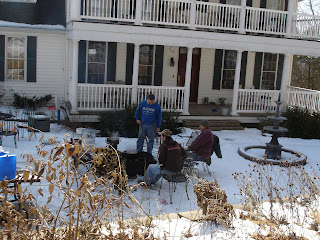 Very cool. How many years have you been doing this? I thought canning tomatoes was an adventure. This seems to require a lot more thought and calculation. Good work!

This is the 2nd year but it's really easy. It is probably harder to make taffy. You can do this in your own yard, even in the city as long as you have a turkey fryer. The best part is that it is pure, not a bunch of high fructose corn syrup with maple flavoring. I read that you can do the same thing with silver maples- ours are hard maples (orange/red). The silver maple syrup is supposed to be a little lighter, like corn syrup.

I wish I could taste that syrup! I bet it's good.

Looks great. I didn't realize it had to reduce that much.

Be careful! Now that you have the "bug" you'll be getting yourself a hobby evaporator! Thanks for stopping by my blog! www.fitzgeraldsfamilyfarm.blogspot.com