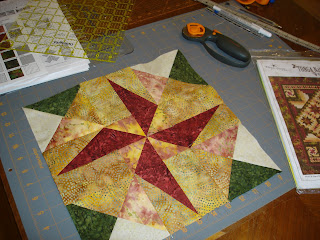 Another round of tornadoes and 70 mph winds hit us late last night killing power to 43,000 electric customers. We took cover sometime after 11 PM when one was spotted on the ground about 5 miles from the house. Danger quickly passed; however,we didn't get to bed until midnight- at least. That's pretty late when you have to get up at 4 AM!

I discovered that our internet service was down this morning so I had the great idea to go into work early, have some coffee in the cafeteria, and catch up via WiFi on my work laptop. In addition, out in our area it would not be unusual for a tree to come down, blocking the road. I needed some extra time in case I had to divert. It's about a 45 minute drive for me going in early, without traffic. I was just about there and my cell rings. It's my call chain telling me power was out with no clear timetable for repairs so they decided to close.

"What!" I said "I'm almost there!" Well, that'not really what I said but I don't use that language here (LOL). I find the nearest exit, turn around and drive the 30 miles back home surprising my husband who couldn't figure out who was opening the garage.

Now what do I do? I realize that might be a strange question, most would probably yell out big WooHoo! But I get bored easy-not the sort of bored where you want to clean the oven or anything, but the sort of bored where I need to be busy. Aha! I have to finish my quilt block before Wednesday so I'll do that and maybe pick up the embroidery. After breakfast!

Tom (Catawissa) is a great cook. He can make a phenomenal dish from absolutely nothing. He would be perfect for Iron Chef. I did take a cat nap awakening to the smell of fried potatoes with onions, garlic and chopped ham, seasoned with Montreal Steak seasoning, hot sauce and butter (a hint of bacon grease for flavoring). It was hard to get going after that but I soldiered on.

One of the quilt pieces isn't exactly spot on perfect, but that's OK. Neither is the embroidery but that's OK too. I need to re-do the "D" using only 1 thread thickness plus learn some stitches. It's just something fun. 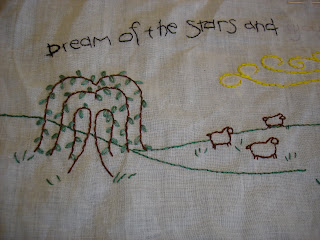 Be careful with tornados. We only get small ones in the northeast, and even those do a lot of damage.

Glad you "weathered" the storm. No chance I'd my workplace would ever close, so it's a good thing we don't tornadoes in these parts.

We're not selling life support like you are (LOL)! It was about 8 hours before the power came on, I guess with so many thousands out from actual fallen lines. It would have been pointless, no lights, no heat, traffic signals were out, no lights in the parking garage. We're mostly paperless with everything imaged and interfaced with our customers, carriers, etc. There are plans in place if it's something more than a day. Even yesterday there were probably key people monitoring from home assuming they had power. Otherwise they switch control over to one of the plants in another state.

Your quilt square is beautiful!

And the meal described made my mouth water!

Looks great so far.
There are a ton of embroidery books out there to help.