A Picnic in the Snow 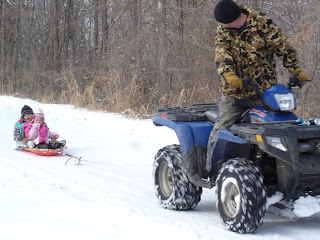 I must be getting way too used to snow. At first I didn't even notice the four extra inches that dropped out of the sky overnight until my husband mentioned it. I even walked out onto the back deck to put a tray of birdseed on the table rather than wade through the snow to get the feeder. Wade through the snow? I cleared the deck after the last snow so there WAS no snow last night on the deck.

Now someone had to plow but my husband was in the middle of a bad migraine. I volunteered even though I didn't have any idea of how to operate the plow which is attached to our four wheeler. The neighbor was taking care of plowing the street and salting the hill. Tom usually helps him but not this morning.

Tom gave me some basic instructions. Make sure to lower the plow just until you feel it start to raise the four wheeler. Don't forget that it's on a angle so you have to align yourself properly to push the snow aside. You have to raise the plow before you back up or you'll drag snow back with you, etc. You have to go sort of fast too. And, don't go so fast that you go over the edge where there is a drop off. Lots of instructions in a couple minutes. Our drive is long, not an entire road but not the typical subdivision drive.

Tom is feeling a little better now so he cleans up the part of the driveway where you just might go off the side and come crashing down the hill end over end. The neighbors are here and the snow games begin. The kids have tied their sleds to the four wheelers and the guys take them for ride down the road, over hills and through the maze of trees- not too slow but not too fast. To the girls it must have felt like light speed. Those girls were screaming as if they were on the Screamin' Eagle coaster at Six Flags!

It's above freezing and the sun is shining, really quite comfortable. I pull out a lawn chair, grab a soda and my current silly girl novel. One of the stray cats is sitting on my lap and we're doing just fine. The guys bring the kids back and they are hungry with a capital "H". Hot dogs they cry!

OK, I go in and make some plates up with broiled dogs, buns, apples with peanut butter, nachos and some swirled sting cheese. The guys have set up more chairs and a table on the plowed, yet snow packed drive and we're having a picnic. I can't help but wonder what the neighbors thought as they drove by. Was it, "Look at the fun those neighbors have" or "Now we know they are crazy!" Either way probably works!

Hope your day was as much fun! :)
Posted by Kathy Felsted Usher at 5:55 PM

Sounds like a blast! But I just want the winter to end already. ;)