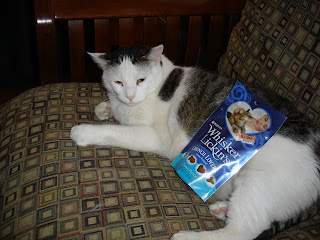 Our cat died today. I came home from work and he greeted me as usual, following me upstairs while I changed and then scampering down the steps with me close at his heels. While we were having dinner he stretched out in front of the fire and never woke up. My husband mentioned that something seemed wrong so I went to check, but it was over.

He wasn't an old cat, maybe 7 or 8. My daughter rescued him from a box along side the road during a rainy season. Someone had abandoned a mama cat who had just given birth to several babies. The box had fallen into the ditch at the side of the road and the ditch was filling up with water fast. Some of the kittens were starting to crawl out, none had their eyes open. Gizmo had become trapped in the sheet and would have surely died right then.

Against our better judgement, we took them all in. We're suckers for the animals and now we had several all in one shot. My brother and sister in law took some to split up the load but both of our houses were now filled to the brim with cats.

He was probably the best cat we had. Besides jumping on counters he was well behaved and loving. I'll miss this one. Tom said Gizmo was acting normally today -but his eyes seemed a bit different than usual.

His sister died a few months ago, again just out of the blue. She had been climbing the stairs and died right outside of our bedroom door, back feet outstretched and hanging over the top step. No evidence at all of distress. I am wondering if we have another batch of "bad" catfood, or do these strays have a genetic defect? They were both indoor cats so there was no chance of contracting a disease from a passerby

This was the last of our indoor cats. We have not been indoor animal free for almost 30 years. There are still seven strays outside that we feed. I should mentioned that they are all tame, in fact if I recline in the chaise on the porch I will no doubt have four cats on my lap and perhaps one or two waiting their turn. We won't bring any more inside. I think they contribute to my husband's migraines since he seems to do better away from them.

This will be a big adjustment. It will be very strange to be able to leave food on a counter and not cover the furniture. I'm not sure I know how to live that way.

I'm so sorry. When my cat died it was surprisingly difficult. Of course, she had been with me for 17 years! I still miss her.

Ah, that is sad. Pets mean so much in our lives. My sympathies.

Dogs, cats and horses just never seem to live long enough. Sorry for the loss. It's hard when it happens so suddenly. I think there is a special place in Heaven for those who are so kind to animals as you are.

How sad. Pets are such a wonderful addition to our lives and the ending is so brutal to our hearts. Hope you find peace in the wonderful times you all enjoyed.