Kathy's Top Picks- The Places I Have Been 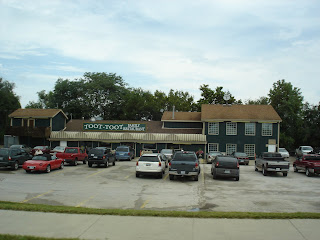 The weather gave us a little slap in the face yesterday sneaking in some early morning sleet and freezing rain. The highways were transformed into veritable pinball machines as vehicle after vehicle hit the black ice, bouncing into and off of each other. The worst was a 31 car pileup, consisting of everything from semis to sedans, shutting down a major highway for hours. I somehow managed to arrive at work unscathed and warm as toast. Unfortunately this puts an end to our precious few days of fair weather and syrup making so I have time to jot down a few observations. I started thinking about some of the places I have been blessed to visit so here they are:

Number 1: Home
There is no place that I would rather be. This is my refuge, far away from the hustle and bustle of the city, a place where things are a little slower and neighbors come five acres away- which is still a bit close. Our business district consists of a gas station, two bars and two churches. There used to be three churches until recently so it looks like the bars are winning out. Oh, and last year there was a produce stand but it was alongside the road so I don't know if she will be back or not this spring.

Number 2: Bethany, MO
This is where my grandmother used to live as well as the Harrison County seat. The town looks tired, in need of some sprucing up. Some homes are immaculate, some barely standing, often times right next to each other. It's OK to be the town character, everyone knows you and tries to make sure you can make a few bucks doing odd jobs. The ladies care. They attend one of several churches, organize the fundraisers and make sure the funerals are nice. They know how to cook. You can walk down to the court house on the town square, past the newspaper office and onto the bank. You used to be able to stop in the dress shop, the one with two whole dressing rooms, but it disappeared along with several other of the downtown shops sometime after Wal-Mart arrived . Before you leave you have to have dinner at Toot Toots, a family run restaurant out by the highway where they make a carrot cake that is to die for. It must weigh 10 lbs and supply 100% of your daily vegetable requirements. Fridays are bonus nights-two buffets, one all fish and shrimp, fried clams and hushpuppies. Not a place to go if you are on a diet!

Number 3 Hot Springs, AR
This is where Mom lives, actually she lives on the outskirts owning a point on Lake Hamilton which is the middle of three lakes connected by dams. Her house is one room wide and follows the point so every room has a view of the lake. At night the lights from the dam twinkle off the water. You can sit out on the deck or take a late night boat ride on the 26 mile lake. Perhaps an evening swim or throw in a line. Hot Springs is a town where you can't tell the nice parts from the not so nice parts- they all look alike. There's a mountain in the middle of town with an observation tower at the top plus overlooks on the curvy drive up. Below you can look down towards Bath House Row where thermal baths are still available or look to the distance to see Mom's lake area. The ducks pick up tourists in town and drive into the lake for a tour. Ducks, for those not familiar, are canopied boats with wheels which are licensed for the road. If you want something more traditional, take a cruise on the Belle. Plan your trip to avoid the main roads near Oaklawn Race Track during track season.

Number 4 Silver Dollar City, Branson, MO
I love this theme park. I lived in Aurora, MO until we moved to St Louis when I was in first grade. We were close enough to Branson to frequently visit Silver Dollar City, back when there were no rides and admission was free. For those of you who have never visited, it is a trip back to the past with the thrill rides tucked into the landscape so the quaint village feel is still the main thing. You take a tram from the parking lot which drops you off at the front gate. Typically there is a banjo, fiddle or dulcimer player entertaining you while you get the tickets or meet up with friends. You might enjoy a homemade apple turnover before the opening ceremony, mandatory before the city opens it's shops and attractions. There's a swinging bridge, a funky house full of impossibilities where water runs uphill and you are often off balance. You have to have your photo taken in the jail or the coffin leaning up against the nearby building. You might eat a wonderful meal of ham and beans in the mine train restaurant, everything tasting a little like the tin plates. Everyone watches the fudge and taffy making, the knife maker, glass blower and potter. Make sure you ride the log flume and Fire in the Hole, an indoor roller coaster through the old burning mine town, probably one of the oldest rides and a favorite of even very young children of acceptable height. I won't disclose the surprise ending. Don't forget to visit the Floozies over at the saloon show and watch out for the stick up while you ride the steam train. The final touch is a tour through Marvel Cave which sits beneath the park.

Number 5 Charleston, SC
I have never visited a city where the natives were as nice and friendly. Real Southern hospitality. I was on a business trip with only a few hours of free time. I was staying at the Embassy Suites, the original Citadel and on the National Register of Historic buildings. It was perhaps 10 blocks from old Charleston so I put on my tennis shoes and footed it downtown to take a carriage tour, the best option when pressed for time. On my way I ran into the nicest people. One couple, younger adults, perhaps in their 20s, asked me if I would like to hold their hedgehog. Yes, their hedgehog! It was a baby hedgehog, all balled up just like Sonic. What a treat! Make sure to have some she crab soup, even if you don't like crab- it's a must in Charleston. Visit the Battery, a rainbow of antebellum homes, porch ceilings painted light blue to fake out the ghosts. Make sure to eat at a little corner diner for lunch and top it off with an evening meal at SNOB (Slightly North of Broad).

Number 6 San Francisco, CA
I love Tony Bennett and I too left my heart in San Francisco, "high on a hill it calls to me . . . " The cable cars, artist, China Town, BART, Fisheman's Warf, the bay, Ghirardelli chocolate. Take a side trip to Sausalito or scenic 17 Mile Drive between Monterey and Carmel. There's nothing like it. I would not want to live there but I'd love to visit again.

Number 7 The Meramec River
My mother would roll over in her grave if she saw me on the river- and she isn't even dead! It's a total hoosier holiday (apologies to anyone from Indiana). It's a day of jon boats with jets flying through two inches of water. It's coolers, canopies and lawn chairs, bbq over an open fire, hair tossed up in a hat and floating in the spring fed river. It's a little music in the background- or not, it depends. It's watching the tattooed ladies in bathing suits way too tight, drinking a few beers (sometimes one or two too many for me. Of course it only takes three!) It's skipping stones, trying to catch minnows with your hands, turning over rocks to see what lives beneath or finding lucky stones with the kids. That's a rock with a hole through it- only 1 hole. It's meeting other river folk as they float by, sometimes stopping to have a chat and let the kids play together for awhile. Sometimes it's the guys taking off for a boat ride while the women and kids play on the beach. It's listening to the bull frogs and watching the herons fly. It's relaxation. 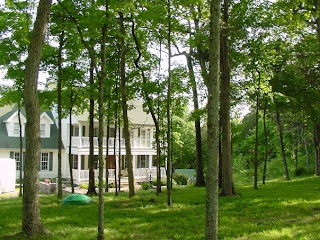 Nice blog Kelly. I will have to put a similar one out of my favorite places in the country. I have to say I'm not a big fan of San Fran though. But I was only there for a single day and we rushed through it. If I had to pick something in California I would go with San Diego or Santa Barbara. I've never been to any of the other places you listed, except for my home, of course. :-P And I agree, one can never beat home. :)

I've never been anywhere in Calif except San Francisco. I was there twice when I was young and the whole family was there. We stayed at the St Francis Hotel on Union Square with a view of the square, back in the days before safety was a factor so you could open the windows and sit on the sill watching all the goings on. Then a wonder Chinese lady at a China Town eatery taught me a few words. I normally shy away from crowded cities.

Thanks for the little guided tour of your favorite places!

Obviously, being married to me for all these years has lowered Kay=thy's standards in more ways than one. When she was a kid she went to Hawaii, San Fran, Colorado, Puerto Rico and God knows where else.

After being married to me getting drunk on a river sounds pretty good!

No wonder your mother cried when we got engaged.

I've never been to any of these places, but by your description I can see why you're fond of them.

Never drunk, my love. A little giggly maybe. I may have lowered my standards but you'll notice the number one place is also your place! ;)

That's great to hear that Silver Dollar City made it on your list and it's an honor to be listed along the ranks of San Francisco and Charleston!

Wow! The Branson Travel Office commented. Amazing. It really is a super place. It's nice to be able to take your kids somewhere that's family friendly.