Snake on the Cukes 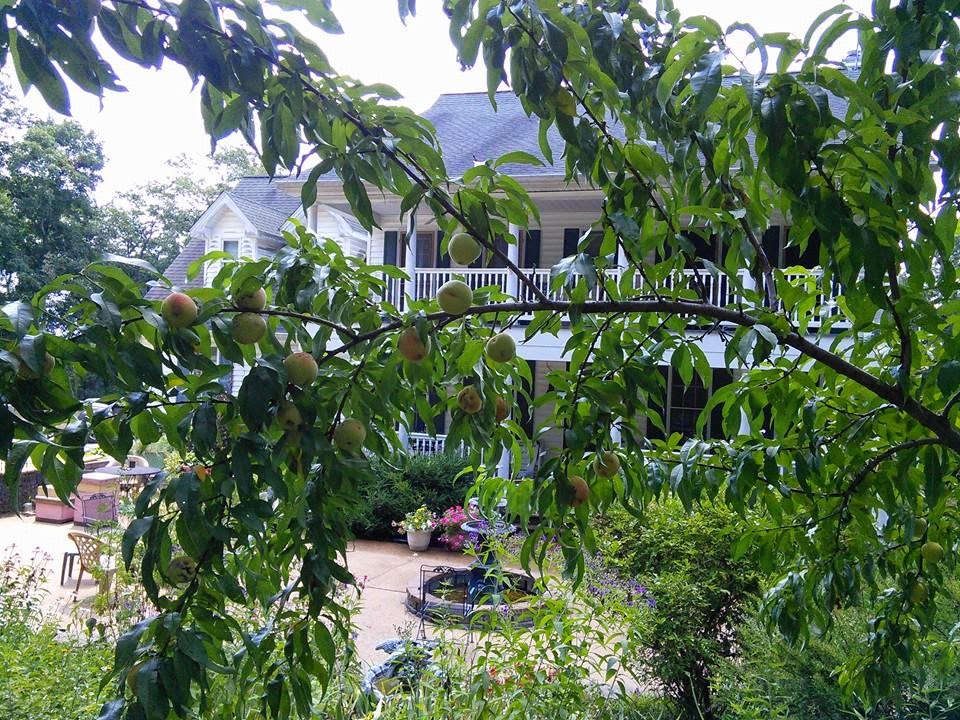 I took a little garden walk to see how things were shaping up.
This is one of the first years we have decent sized peaches,
although I still have little to no hope of eating any.
The raccoon have stolen and half eaten several, the
remains scattered beneath the tree.  Bugs are making their
way to the fruit too but still, it's nice to see at least the start of fruit. 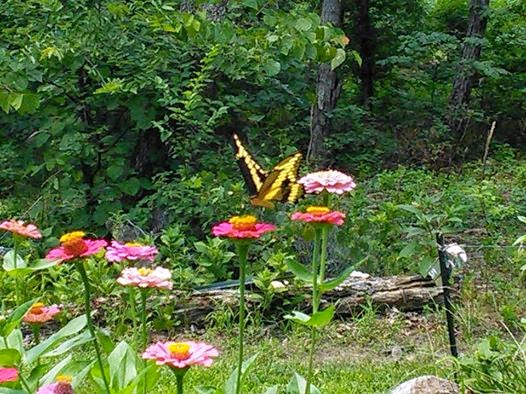 I quickly snapped this shot just as the butterfly was
landing on the zinnias over at the big garden. 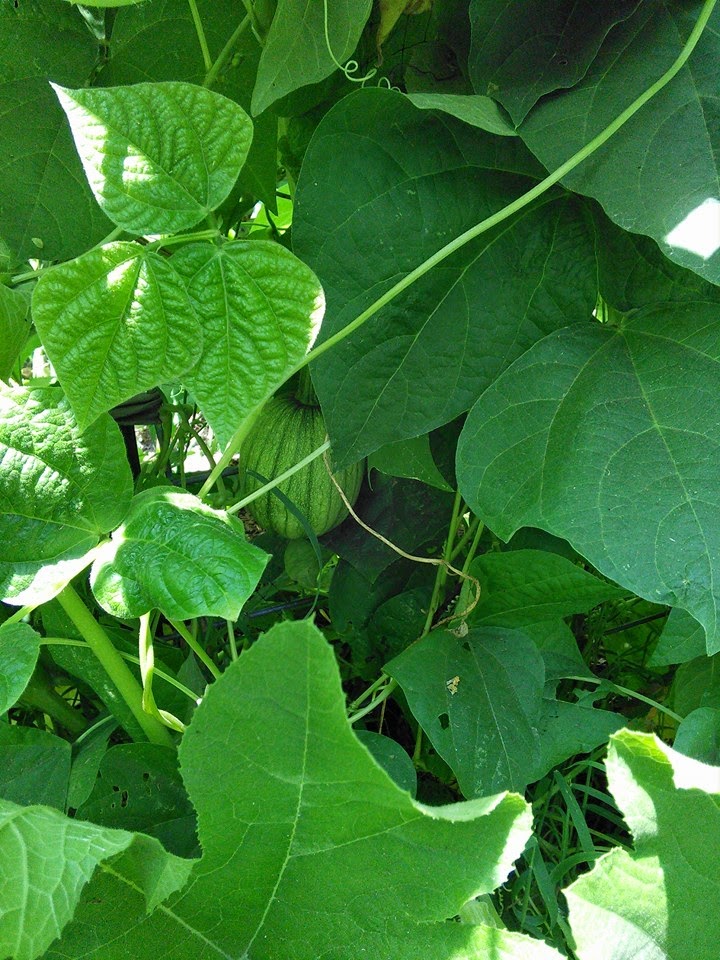 We use cattle panels to attach any plant that can grow
vertically to save room and keep things orderly.
I have cucumbers, beans, a volunteer cherry
tomato (that is tending to vine) plus THIS!
Is it a volunteer squash or
ANOTHER CATTLE PANEL PUMPKIN!!
I really don't know at this point but I"ll keep watch. 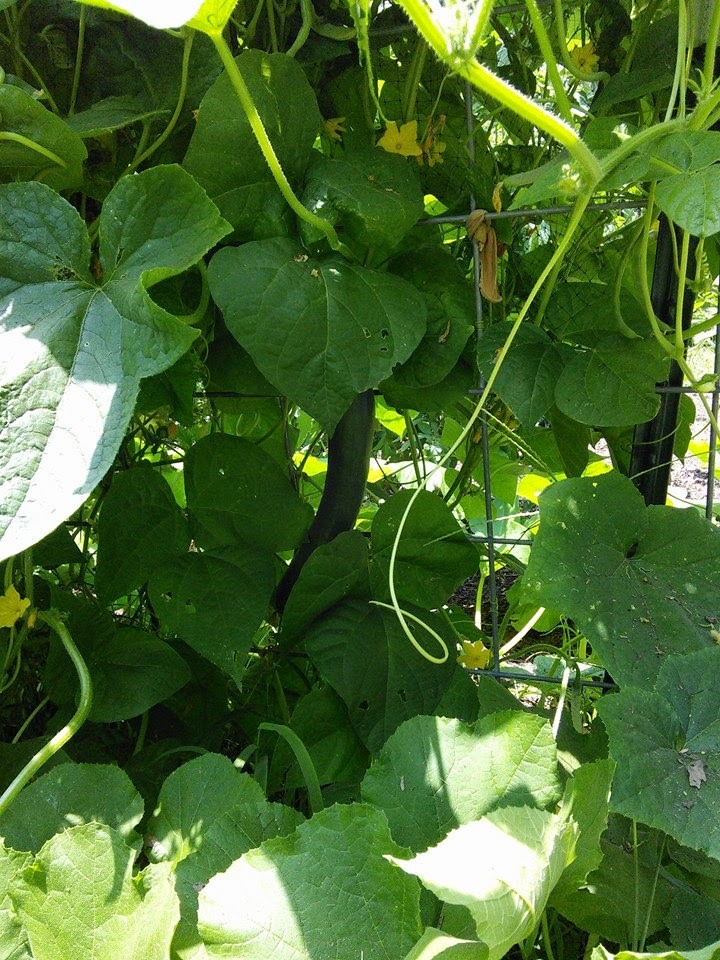 As I was keeping watch over this long cucumber,
I saw something unusual but didn't capture it on camera.
I must have been one of the pantyhose ties, similar to
the one pictured here, that allows a little wiggle room
as the plants mature.

But the one I saw was curled around the cucumber vines.
It had little dark bow ties running down its back,
and it had eyes.
My pantyhose don't have eyes.

Great.  A baby copperhead is just as bad,
if not worse, than a copperhead mama or papa.
They don't usually kill you in Missouri although we
just had a recent case where a man died, being bitten
several times. He went into anaphylactic shock.
Mostly, you need to get treatment and will be real sick.

It isn't unusual for us to have copperheads
but they are not typically wound around my cucumber vines.
They like to sun on our retaining wall blocks
so we just move them back into the woods, if possible.
I'll have to be extra careful as I gather my harvest.
I will poke around with a stick first. 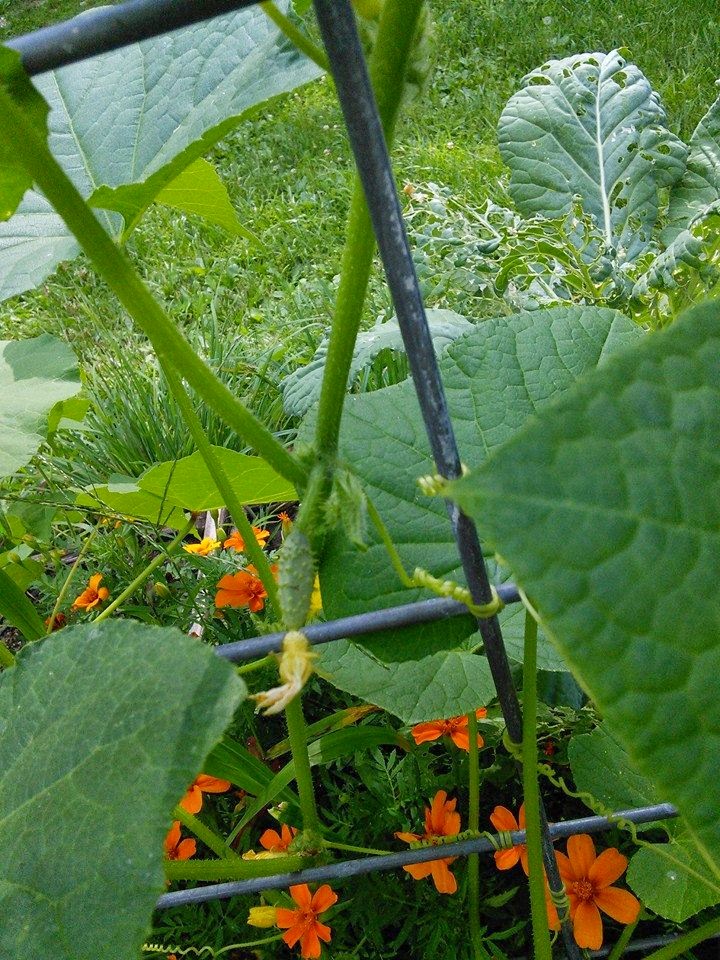 On the brighter side, I have my little side garden that
has the beginning of a cuke!
Adorable.

I used to shoot them when I lived in an area that had them. They are real hard to see so be careful.

Your butterfly pix is beautiful! And, I reeeally don't like snakes of any sort even though I know some are good. I hope you use a very long stick when you are poking around.

That's not good. Copperheads have bitten me twice. Once a dry bite from a small snake that was not a big deal. Once a big snake got it's fangs tangled in my jeans and pumped me full of venom. That was very unpleasant. Be careful of those things! Don't want your husband to have to take care of you, instead of you taking care of him!

That is what I am so afraid of. (well, among many, haha.) A snake in the garden. We haven't seen so many snakes this year. Maybe all the mowing and such has scared them off this year. I can only hope.
Be careful and have a wonderful evening!

Ick! don't like snakes...
usually they are just chicken snakes in the coop. But...copperheads. No!
don't want to see any of those around.
Your cukes look nice. Mine got a burst of energy from the cool weather and the rain over the last 5 days... warming up now and the Tomatoes are finally getting after it!