Death of the Stalk 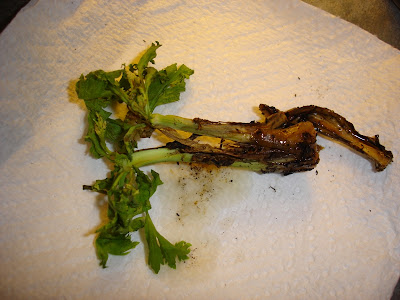 I don't know how it happened.
It had been thriving and suddenly took a turn for the worse.
I had such hopes.

This is the celery stalk, one we used to make soup.
We cut off the stalk, leaving the bottom intact.
Then I suspended it in water so roots would start to form.
It grew and grew.
Then it started to fail - rot would be a better word.

I figured it was too much water
so I transferred it to dirt,
which was fine for a week.
Then it  died.

Posted by Kathy Felsted Usher at 5:28 AM

I've never tried this so I'm not sure -- maybe there's a small window of time as when to cut it? :)

Strange that it would suddenly rot, I have never tried that. Did you use treated water? I am getting ready to start some sweet potatoes to get shoots, hope I won't have the same problem.

Not sure what to say, Kathy. I've done 4 so far. Not had super success. One died outright because I can't keep the cat out of the garden. The other one I put in the garden started out doing well, and now just looks so so. (I'll post pictures later.)
The other two I put in potting soil - one in a bucket, the other in my red neck toilet planter. They seem to be doing well so far. The one in the 'planter' went out in December.
I did notice that once they start to 'rot', it seems to continue no matter what.
Perhaps where you keep it is too warm?
I will say that when I transplanted mine, for lack of a better term, they only had two or three very short roots. I don't know if that has anything to do with anything though.
*hugs* Have a wonderful weekend! ♥

I've never had any luck with growing celery. So I'm no help.
Love Leanne

I have well water so nothing treated. My sweet potato is still doing OK but it's looking a little stressed. we keep our house really cool (65-68), maybe it's too cool for it?

I don't think so. Maybe I kept it in the water too long.

It only had a few shallow roots but I probably water logged it . It was starting "to go" just before I put it in the dirt.

I think I'll try it outside. I thought I'd give it a shot with the grocery store cutting.

Looks like it just rotted out. My mother grows celery. Not sure if there's any special trick to it.

I am no help. I have never grown celery.

Ohhh. Did you change the water regularly? And did you use the magic ingredient? ;)

I have dried willow bark (salix species)that I put a pinch in everytime I change the water - and it has a natural special hormone in it to prevent bacteria and start roots...

there is a nice reason why the little girl who lived down the block from us in Wisconsin asked me if I was a witch LOL You can cultivate and use young willow bark from any creek bottom :); make a tea, and the water is good for up to three weeks.Plus while you are down there look for wild catnip for all the kitties in the neighborhood too!..or you can cheat and stick a pinch of dried willow bark in a jar full of water and let it sit on the windowsill in the sun with the same plant that you are trying to get roots from...

LOL, you're kill'n me with the witch talk! Yeah, I need to do more research on natural remedies. I know it's like aspirin too. We have books and used to have a chemist neighbor that I was counting on when things get tough. Alas, she moved halfway across the country. I've got 2 nurses now and an aerospace engineer so between the three of them I hope I have this covered! I'll do that though, the willow bark. Thank you.