September Garden, Peek A Boo, I See You 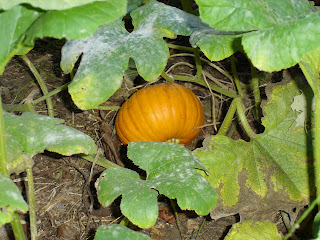 The September garden after a summer drought.
One last hurrah after our recent rains.
Powdery mildew and tattered vines
producing pumpkins nonetheless. 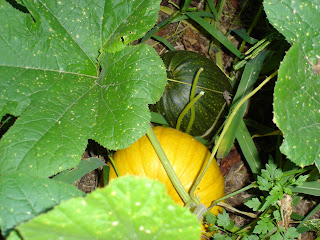 Yards and yards of vines and leaves,
yet only three little pumpkins - until the rains.
Now babies are popping up all over. 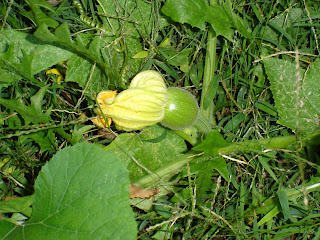 At last count, at least six or better. 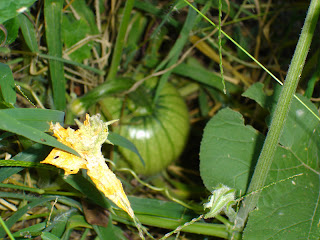 Hiding among the vines
and weeds.
I haven't tended the garden
for the past two or three weeks.
Now that life is somewhat normal,
I'll be able to spend more time here. 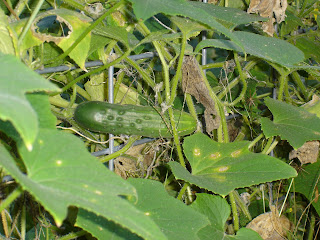 Spiny cucumbers hang from the cattle panels
along with a few lingering squashes.
We found the hanging squash were unaffected by
squash bugs, but the ones on the ground had leaves
that were infested and needed daily care. 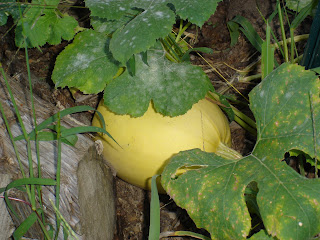 Spaghetti squash went into the dehydrator today,
about 10 squash cooked and drying, with more on the way. 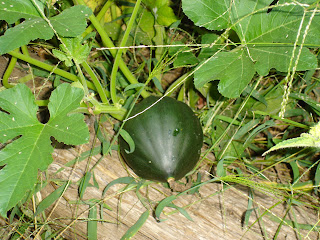 Acorn squash continue to multiply.
We've got 11 in the house.  It would have been  13
but two turned very yellow.  In addition to this, we still have more on the vine. 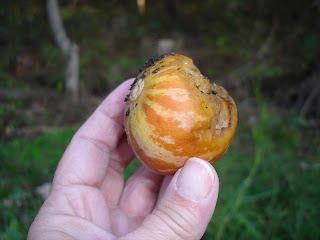 I missed a little Tiger Melon.
I was really hoping to see what one tasted like, but someone got it first. 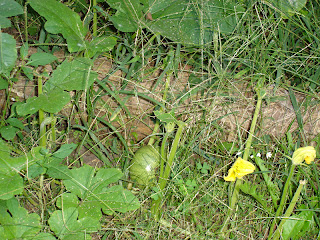 You'll notice something has decided to eat my flowers,
leaving stalks at our pumpkin patch.
I think I know who it is. 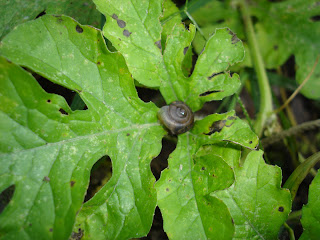 Not him.
He's done his own damage.
My husband has been seeing deer up by the garden,
which is bad enough; however, they are
congregating on the roadside too,
nice and early when it's hard to see them.
Thankfully their eyes glow when headlights hit them. 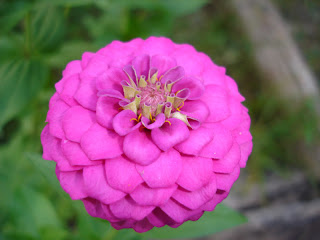 The zinnias are taking off, completely unattended.
Orange, red and purplish-pink. 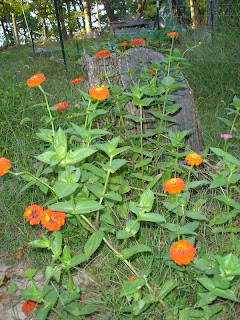 We've got a few more weeks I suppose
before we till it all under
and work on prepping the soil for overwintering. 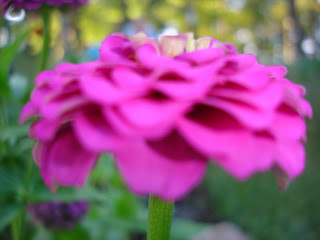 You had better luck with squash than I did, I think the bugs did mine in as we had a lot more rain than you guys. Maybe next year.

Not sure where you live,but the damage to the leaves looks like what the groundhogs do here.They love zucchini and pumpkin leaves. Darlene

I had so many bugs you can't imagine. Every single day I went to the garden with my roll of duct tape and turned over almost every leaf and press the tape to it, removing the eggs and nymphs. I found a couple of big, mature ones too. It was extremely time consuming but bug hunting started to be fun and I looked forward to it. LOL

We do have ground hogs here. One used to live in our brush pile and waddle out every day to munch on our weeds. It wouldn't surprise me if there is another.

good to see you have some squash taking off.
I have one little pumpkin. I think that is probably all I am going to get. so sad.

I almost ran over a groundhog today. He was sitting up eating right next to the road. I mean my tires were within two feet of him. But I didn't have the heart even though I know he was probably making a mess of the people's yard behind him.

I had four deer run past me yesterday, and the day before that I killed a rat snake. Seems like all the critters are on the move right now since the heat has moved out.

It is sad! Next year will be better. Our big loss were the tomatoes, lots of them that never turned red.

I had three suicidal squirrels run in front of my car yesterday. One actually stopped in the middle of the road and stood up!

Maybe he was an All State salesman in disguise.

Hello, new follower here! I would love to have you link up with my Clever Chicks Blog Hop this week!
http://www.the-chicken-chick.com/2012/09/clever-chicks-blog-hop-2-featured-post.html

I hope to see you there!
Cheers!
Kathy
The Chicken Chick