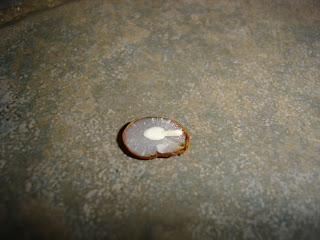 It's going to be a snowy winter here in Robertsville,  at least according to the persimmons. Once your local persimmons ripen remove a seed, wash it off and pry it open.  I used needle nose pliers to squeeze the sides until I could grasp the edge.  You will see that the very center of the seed contains a kernel that has one of three shapes:

That is good for us having suffered through a bone dry summer.
We need the moisture back in the aquifers! 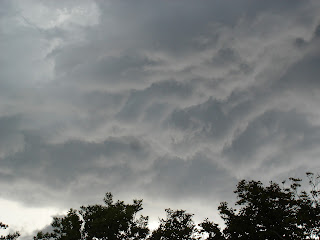 We had a doozy of a storm last night.
Windy and lots of rain, which we really needed.
It is soaking in now but my culvert is once again a pool!

My husband got into Weather Spotter gear as he
transmitted messages for the the National Weather Bureau. 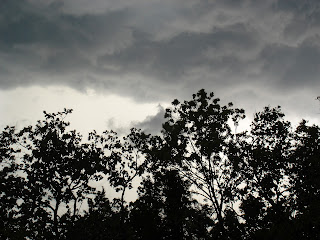 They couldn't contact the weather repeater to get accurate reports
from the Potosi, MO area but my husband was able to reach it
with his radio. He was able to to provide that information to
both the weather net and to the ham operators/meteorologists
at the Weather Bureau.

This is his first activity since being discharged from the hospital.
His neurologist had him on all sorts of drugs, which is not maintainable.
He would be zombie-like, unable to think straight and probably
addicted to medications.  That's not the answer.


He's doing better after consulting with the pharmacist at his Coumadin clinic.
They found that a straight caffeine tablet combined with a single aspirin can
keep these raging migraines at bay for awhile.
We have been successful for a couple of days so far.
They keep returning every 12 hours so he has to keep on top of it.
We have hopefully turned a corner.

Guess I should go get my persimmon seed. I sure hope it's a spoon!

Glad to hear your hubby is able to function. One of the few people I know who has to take caffeine. I've heard that caffeine can help with headaches. Something about opening the blood vessels.
*Hugs*
Have a blessed Sunday. ♥

I need to get a persimmon. Hope the caffeine and aspirin works.

Glad to hear your hubby is doing a little better!
This is interesting about the seeds, I'm not sure if persimmons even grow around here! I have been noticing the ants collecting "food" already though...

I never heard of that one before, it will be awhile before I get to the persimmon seeds though. Glad your boy is doing good.

I've never heard this before but I'm glad to get the info on it..Glad your husband is doing better.Blessings

Yes, lots of us need the moisture even thought I'll have to drive in it!

Thank you. It's a fine balance between just the right amt and too much, which can cause migraines. This has been incredible, after years and years of pain! A simple caffeine tablet.


thank you- hope your persimmon has the shape you want!

Us too! They are all over, even the cherry tomatoes.

My mother has a persimmons tree. I've never heard that. I will have to try it myself. Thanks. :)

Kathy,
I am happy to hear that your hubby is doing better. I will keep praying for those migraines to go away. I think it's so nice that he shares his talent with the ham radio to help people. I sure hope your persimmon is right. We've been real dry too. I think our mountains could use one of those 100 year storms to fill up all the underground water aquifers.