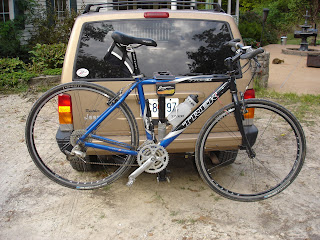 He stole my Jeep!
Back in the day the hubby used to ride almost 100 miles per day.
That's when we were both thin and he had hair.
Now it's time to get in shape again and build up his strength
after being in the hospital for a week.
I'm going to have to join him, but I don't do hills as well as he does.

Notice there are no pedals- his shoes clip onto where the pedals should be.
I don't think I'd care for that but I suppose it is what you get used to.
We have several areas where we can ride which is good
because our road is gravel.
There is a network of biking and hiking trails just minutes away.

The Meramec Greenway
"a 60 mile multipurpose trail along the Meramec River,
from the confluence of the Meramec and Mississippi Rivers
to Pacific Palisades Conservation Area in Franklin County"

There is also the "Old Zombie Road" in Glenco, MO
now known as Rock Hollow Trail.
Glenco was a resort town and also played a part in the Meramec River
industries of years past- mining for lime, sand and gravel.
It was a teen hangout in the 60s and 70s (where the name Old Zombie originated.)

This beautiful 2.3-mile trail opens one half hour before sunrise and closes one half hour after sunset. What was once the decaying Lawler-Ford Road has been recreated into a beautiful trail for hiking and biking. Rock Hollow serves as an important connector within the Meramec Greenway. This is among the most scenic of Great Rivers Greenway trails, and is a wonderful way to connect with nature.

Robertsville State Park is only a few miles away.
We put his jon boat in there from time to time if it's just a fishing outing.  Sometimes we take Taylor over there to fish in the bluegill pond where every cast results in
at least a nibble if not a catch.
We've even camped, that way we can get home to let the chicks in at night. 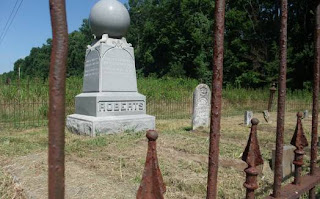 Katy Trail State Park
The old Missouri-Kansas-Texas Railway (MKT or KATY)
It winds it way across fields, around bluffs,
and through all sorts of wineries and beer gardens!
Good thing it was built on abandoned railroad beds, at least it's flat! 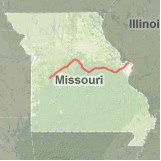 I suppose I'll start riding again soon.
Taylor too since Robertsville State Park is about five minutes from our door.
We can bring our poles and stop for some quick fishing afterwards.

It's time to get healthy.

Railroad grades are good, there can be some long grades that are a drag but nothing like the hills. It is a whole other world of muscles to deal with on a bike, mine has a flat tire, oh well.

Hi Kathy I hope your husband goes from strength to strength with his new lifestyle. It's always hard to come back from illness. I will be thinking of you. Susie x

Lots of neat places to ride! I like the idea of taking the fishing poles along, maybe catch a healthy dinner while you're out! :)

I will be pretty sore when we start. Fortunately I have one of those bikes where I sit upright and we got a comfy seat!

Thank you! He's improving daily and taking a very firm stance to getting exercise and eating right.

Yeah! I like a mild fish like bluegill, Tom prefers catfish but mostly it's bluegill in the little lake.

Last I heard Zombie Rd. was closed, so you might want to drive by on your way home from work some night and check that one.

I used to ride with a church group years ago who did the Katy Trail quite often. It's great riding but not much for a road bike with skinny tires. I've got a Cannondale hybrid that has some of the best features of a road bike and a mountain bike both. The tires aren't skinny but they also aren't fat like on a mountain bike, and it did fine in the Katy's gravel.

I also liked biking at Forest Park. Nowadays my Cannondale sits in the grage and shutters whenever it sees my lard-butt coming.

I wish it weren't so hilly where I live. I am to old to ride them but I do love riding bikes. For now I will walk. Have fun!

Zombie Rd.(Lawler Ford) was closed for a long time after the safety Nazi's took control. Far West St. Louis County was a whole lot more fun when we were high school kids back in the '70's. But now it's paved and a bike/hiking trail. It's a far cry from the old rutted road that used to lead down to the river. Man, the brain cells that saw their demise on that drive!

My tires are Bontrager Select K's with Kevlar. They seem to be good street tires with low rolling resistance. I ran Specialized Touring Turbo's for years on my old street bike and the Bontrager's have a similar feel. They do fine on gravel trails but they are most at home on the road.

My bike is a Trek 7700 FX which is a hybrid like your Cannondale. It's ultra responsive and fast, more than I expected when I bought it about 6 years ago to replace my trusty old Univega commuter. It's also completely hand built right here in the good ol' U.S.of A. Beautiful workmanship and quality. And it shows in the frame rigidity, too. And the welds are a thing of particular beauty, too.

I can't even imagine how many miles are on my old bike. I used to ride it from the east side of Chesterfield to Webster Groves everyday to get to work and back and then ride another 20 miles or so in the evening. I usually tried to get in a long ride on the weekends, 75-100 miles. That old bike is literally worn out.

I guess it's muscle memory from all those hours spent riding years ago but I can get on my bike and generally get most of the kinks worked out in a couple of weeks. The legs feel like Jello to start but they come back pretty quick.

I'm amazed at how well my lungs and heart feel after this little problem of mine. I'm getting better air than I have in 30 years. And the heart rate is staying controlled. Oh well, a couple weeks of riding in the little gears and then I'll start pushing the big ones again. That'll tell the tale.

I just wanna thank every one for all the prayers and concern. I'll take all the help I can get. I earned this through years of doing things that I knew were going to catch up with me someday.

Now, it's back to the bike and clean living.And trying to keep my wife happy.

"Now, it's back to the bike and clean living.And trying to keep my wife happy."

I looked up my bike on the net last night and found that it actually sells used for around $300, and that's pretty close to what I paid for it some 10 to 15 years ago. (I think it listed for $450 or so.) This is an aluminum frame 21-speed bike and either 26 or 27". Light as a feather. Before that I road an old Raleigh 10-speed I got for my 16th birthday. Now THAT bike had a lot of miles on it!

I wish I were skinny enough to ride this bike again, but I really ought to sell it. It's in great shape and I could probably get top dollar for it. I think my riding days are done even if I did get real thin. No more desire.

If you need the money then get rid of it. The only thing I'd bring up is with the way things are going I wouldn't be surprised to see those glorious days of the early '70's come back, the ones with fuel lines and shortages. If they do, a bike may become a fairly handy thing to have.

Brother, I weigh 261 lbs. If I can ride a bike anyone can. So don't let the weight stop you. I know you're a big guy but it should hold you.

My bike is pretty darn light, too. All aluminum, I'm guessing in the 25# range. Not as light as a racer but for a tough road bike it's pretty good. I've had this one for 6 years or so. When I bought it the list price was around $1500.00. I've never looked to see what the resale on it is. I know pieces and parts are expensive. Luckily, they're top of the line so they rarely have any problems. I learned years ago that you definitely get what you pay for with bikes. And I wanted it to be the last one I ever bought.

And, if I remember right, I did make Kathy happy once so I know it's possible.