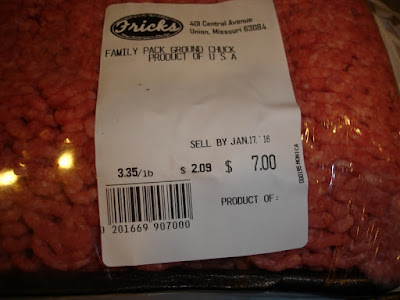 Our local grocery is offering some great deals,
this beef for $2.09/lb and canned vegetables for around
$0.39 each.  We have purchased several dozen cans
to stash away in the basement, dated and sorted
so we use the oldest last.  You can't beat a great sale.

We vacuum seal and freeze the beef in one pound packages.
Fricks raises and butchers their own beef plus
they make the hams that many of you may be familiar with.
We ended up with about 7 lbs of packaged beef for
hamburgers, sloppy joes, spaghetti or lasagna.
Pretty good deal.

In 1896 a historic event took place in the small town of Washington, Missouri. That's when a well-known cattle trader named Edward Frick opened his own meat shop for the early citizens of Washington. Edward's hard work soon paid off. Word spread to the surrounding areas and Edward hired his first employee. Not long after, his son Malvin joined the business and Frick's Meat Shop moved into a larger facility downtown Washington.
Today, four generations later, the Frick family still operates out of Washington, Missouri making smoked meats and sausages in many varieties. Throughout the years, Frick's Quality Meats has remained a family-run and family-owned company committed to quality.
That commitment to quality has allowed us to contribute a few "firsts" to the meat industry. In 1980, we developed one of the first consumer packaged pre-sliced ham items for the meat case. Back then, ham had to be sliced in the deli at the time of purchase.
Link to Frick's meats and link to the hams

Posted by Kathy Felsted Usher at 4:41 AM

This is one of the smartest things & so few folks are willing to 'go through the hassle.'

Boy, that IS cheap! Fricks has always had great meat. I think every grocery store I ever worked in carried their product. I always liked their ham a lot. Beats the heck out of Kretchmar's sour tasting stuff.

When I was young I didn't realize it was the same Fricks. They always have good meat and the butcher is on site. They also bbq and sell their meat on site plus have a dinner section in their deli where you could pick up an entire dinner if you wanted, looks good too. They have a section with small portion desserts and sides plus little sandwiches that you can take to work.

I knew they were a local company, but I wasn't sure exactly where they were at.

Meat sales are always good. Especially when two of your boys are living with you again.
Enjoy!

My friend gave me a vacuum sealer for Christmas, but I haven't tried it yet. We don't keep our freezer meats that long so I plan to not use it for that right now. - Margy