Doodle Bugs In My Garden 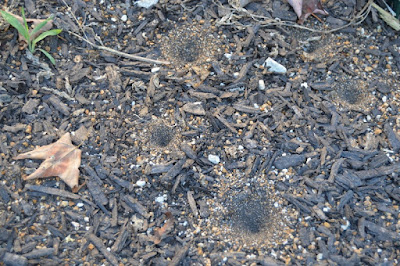 There are funnels of sandy dirt in my side garden
and some little inset that is below the surface kicking
up the loose pieces.   I have waited and waited until
finally whatever it was emerged.

And it was sort of scary! 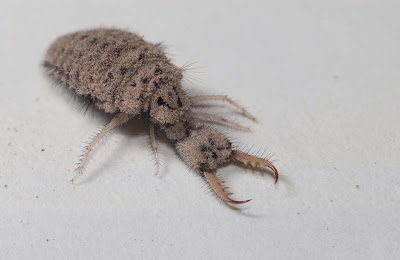 What the heck kind of beast has moved in?
This image is enlarged quite a bit- enormously in fact,
the creatures are tiny but nonetheless looking as if they
should be something that wants to eat humans
from Journey to the Center of the Earth. 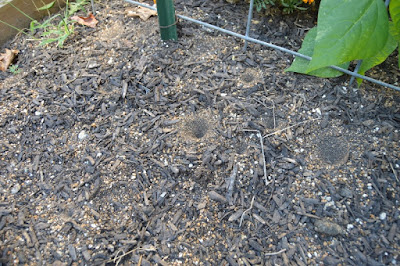 What was I to do?
Google it, of course.

They are ant lions, a beneficial insect and boy,
do I have a lot of them!  This is the larval form.
When they grow up they will resemble a damselfly
but they come out at night so you don't see them much.
As larva, they dig steep funnels which capture prey,
primarily ants but also other insects that could damage
your garden.  The more the prey struggles, the deeper they fall.

After the short rain the other day it was as if a
major construction site was in my garden.
They were all down there kicking out the fine
mix of compost to remake their funnels. 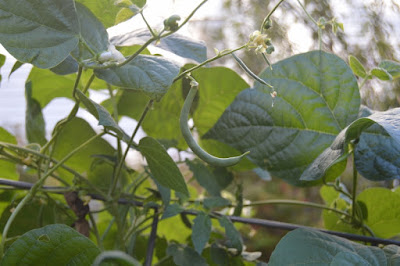 I planted some pole beans and bush beans later in the season
which are just above the funnels.  I tried to plant more but
between the heat and lack of rain (so different than the
soaking, cool spring we had), I was not getting much to grow.
The beans are now producing so I hope the little ant lions
are working hard to keep bugs away. 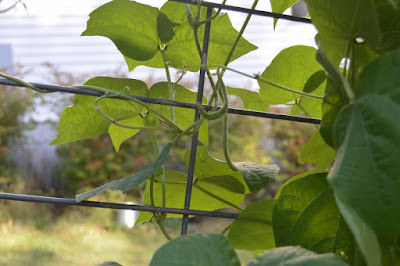 The other name they are know by is Doodle Bug.  In sandy soil
you can see their meandering trails as if someone were
doodling in the soil.  I even saw songs and poems about them on line. 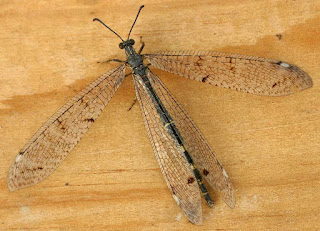 Here is an adult version- see photo links below for the
larva and the adult.

Posted by Kathy Felsted Usher at 9:15 AM

I wonder how they fare against fire ants. Would love to entice some here, if that's the case.
Your beans look great! I replanted, too, but they're nowhere near as tall as yours yet.
Have a blessed week!

It mentioned they have been known to eat fire ants

I remember playing with them at the old sawmill my family once had in what is now my front yard.

When I was a child in Florida there were always ant lions in the soft sand on the floor of the shed where my grandpa parked his truck. I remember them well.

Yes! Ant lion... these little creatures fascinate us. The LITTLES and I can sit for hours watching these crafty little guys do their thing. I remember watching with Bree once and she got so upset that the Ant lion was going to eat the ants...she grabbed a twig and insisted on helping the ant out of the hole, and he'd find his way back. She was quite disturbed by the whole thing.
I finally had to distract her and get her mind on something else!

I remember seeing ant lions as a kid in the sandy soil of the Los Angeles riverbed. Yes, at one time it was dirt and sand (even some quicksand). But now it's a cement channel to the ocean with a slimy trickle in the center. Such is progress, but the flood control provided is important. - Margy

I remember seeing ant lions as a kid in the sandy soil of the Los Angeles riverbed. Yes, at one time it was dirt and sand (even some quicksand). But now it's a cement channel to the ocean with a slimy trickle in the center. Such is progress, but the flood control provided is important. - Margy