Autumn Arrives, No Pumpkins for Pies! 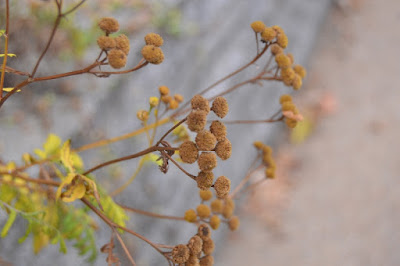 Fall has officially arrived but without the grand display of
color that typically blankets our area from the top
of the ridge to the winding county back roads. 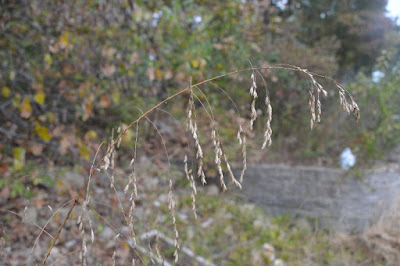 It seems that Summer never arrived, it only passed
through for a couple of weeks.  We went from drenching
rains with cool temperatures to blazing heat without
rain resulting in a poor gardening season. 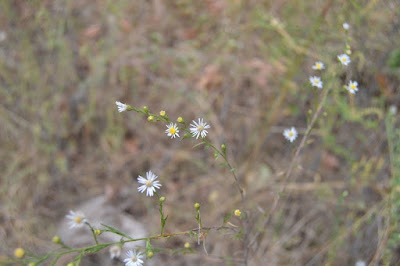 It was my first year without squash bugs for a while.
The deer grazed on the lush greenery in the woods
but now that has changed.  Currently, my only good
crop is the small patch of bush beans and a few
pole beans winding their was across a couple of cattle panels.

I saw three deer scoping it out last night,
it won't be long before the beans are nibbled to the ground.
And I'll let them, it's slim pickins for them right now and
they are dealing with hunting season as well.
Now I don't mind some fine venison tacos or sloppy
joes but a couple of these are young ones
so I hope they stick around. 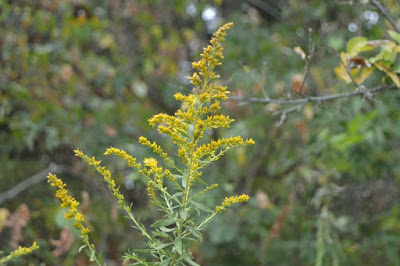 The last of the golden rod.  Most of it has dried
and withered.  The bees enjoyed it while it was fresh. 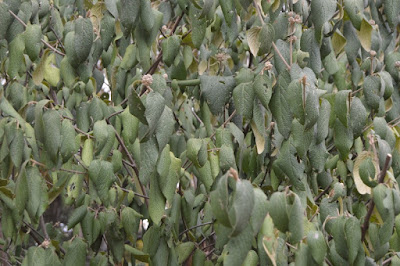 I've tried leaving the hose running at the base of the viburnum
but still they just can't get enough water right now.
They are in raised beds, mostly filled with rock and a little dirt
that is in the retaining wall out front by the court yard.
I don't know why I'm worried about them, their fragrant
flowers, abundant fragrant flowers I might add, smell
like rotting flesh, right next to the seating area.
I had no idea when I planted them. 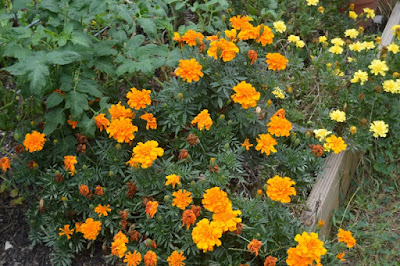 The bees are now choosing the marigolds which are doing well.
I planted them to help rid the small side garden of bugs
but they are doing better than anything else! 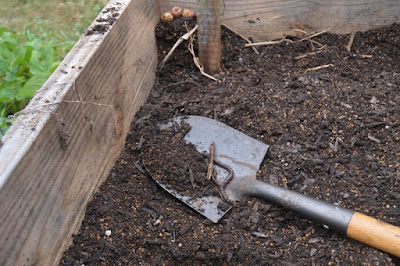 Even the potato tower was a bust.
You can see a few little buds in the upper left corner.
(Click the photo to enlarge)
Normally I can dig down and pull out what I need for dinner.
I still can if I want to eat giant worms!
Which I don't. 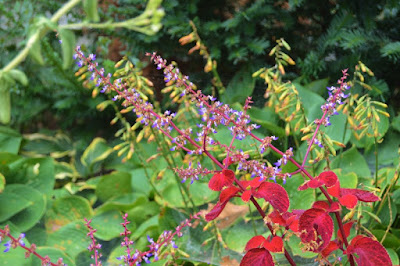 And the coleus is magnificent bedded down with the
hostas which are protected from the mid day sun.

I am off work tomorrow, taking most of the remaining days
one day at a time other than a few together in October.
We had some restrictions during the time our company
split into two separate companies so a lot of the vacation days
were put on hold and now that we have half as many people
we really have to watch coverage since there are fewer
to take over if you are out.

Nothing big planned except running out to get cat food
and then I might spend some time in the girl cave since
I have seriously neglected sewing these last few months.

We had an early spring, but the rains gave the plants a good start. July and August were hot and dry, but I kept up with my watering and had one of the best growing years in my raised beds and pots that I can remember. My marigolds are still going strong too. I love the pop of colour they give. - Margy

We have a few tomatoes hanging on and the sweet potatoes are growing. The chickens ate my pumpkins, I didn't think they would bother them but they sure did but I have plenty of butternut that was growing out of reach. I have saved the seeds and have been putting manure on the garden and will plow when I get the tire fixed on the tractor. Fall is here and it feels like it.

Our leaves are changing here, way early. I think this means a bad winter but the weather people say no.

Kathy, I had the privilege of attending the Papal Mass when Pope Francis was in NYC. I hope you stop by and read my post on it:
http://ashesfromburntroses.blogspot.com/2015/09/the-papal-mass-christ-in-city.html