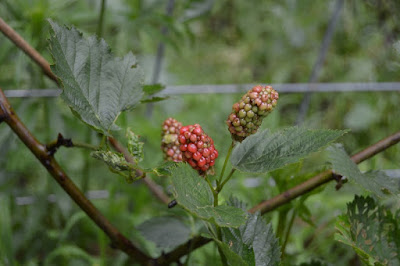 We don't have many vegetable crops in due to soggy conditions but anything producing fruit or berries is truly enjoying the season.

The blackberries are doing very well with the unusual amount of rain we have been having.  I planted a couple varieties last year which seem to be taking off.  This one has larger berries but fewer of them.  There are no thorns on this variety so I'm hoping to get berries before anything else does.  I really can't eat the seeds so my end result will be jelly or sorbet.  There is evidence of bugs but I don't see extensive damage on them. 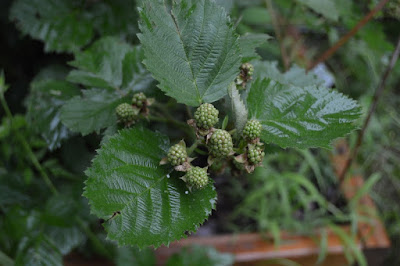 The other variety is a more compact berry and it has spread outside of it's raised box.  My husband put cattle panels to tie up the arching branches but we may need another row to support the plants that grew from rooted vines that sprawled away from the fence. 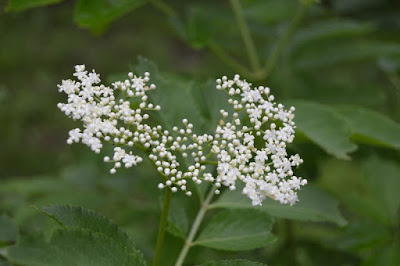 Our lone elderberry (Bob Gordon) is blooming.  There is a field of them
about a mile or two up the road, planted by a new elderberry farmer
who has planted several varieties.  I'm hoping to see the pollination benefits from his rows.  The blooms smell magnificent. 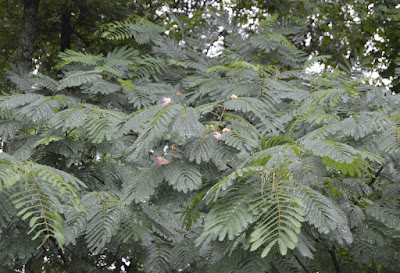 The mimosa is as large as its ever been and stating to bloom with the most sweet smelling flowers.  My neighbor has a very large pair at the top of our drive and you can smell it as you come close.  After the storm several of the flowers were thrown onto the road, still sweet smelling so I picked up a few so Taylor could have a nice whiff. 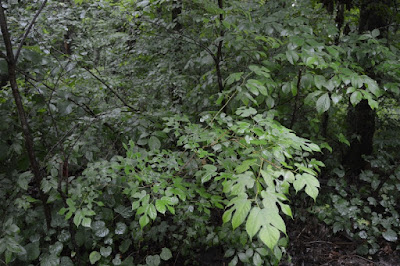 And finally, a volunteer mulberry where I can let it grow without
running into our coop or rooting under our front porch deck.  Hopefully this one will give us mulberies in years to come.  I am hoping to get a paw paw but I don't think I can provide the amount of water they need in addition to the lighting conditions.
They like to be in the shade for a couple of years and then full sun plus get plenty of water.  It's a tree I've wanted since I was a kid.  In fact, I want an entire patch of them.  They grow here but mostly by the creek beds and I've only seen one fruit but it was not on my property so I didn't get to taste it.

Today, between rain shows, we have to put another row of boards on our
potato tower.  They are growing faster than we can bury the new stems. With luck we'll have plenty of potatoes for the season!


Posted by Kathy Felsted Usher at 8:20 AM

Everything looks great. Congratulations with the potatoes! Hope you get bonanza. :-)
Hope you all have a blessed week. ♥

I don't remember seeing so many blossoms on our blackberries here in Powell River. They are volunteers just about everywhere around town and along the coast. I just hope they don't ripen too soon with all the warm weather expected this summer. We need to to stick around for our Blackberry Festival in late August. - Margy

Ours ripen in July, the temperature difference must be enough that ours come in earlier.

We have blackberries here, but between the bears and the copperhead snakes I have given up picking them.

Very pretty. We have had a rainy and cool spring here also...our winter was no treat either with record breaking amounts of snow. In fact, we had so much snow that there is still a large snow mound in Boston!! The gardens are looking pretty though.