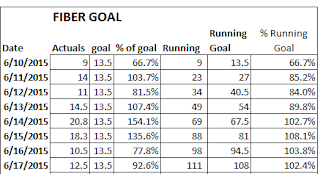 It's almost my birthday and it sure is hard to get old!

I was just diagnosed with ulcerative proctitis, a chronic autoimmune disorder
that causes inflammation in the lower six inches or the colon,
leading all sorts of uncomfortable conditions such as bloating,bleeding and
a lot of ugly stuff.  It is one of the Inflammatory Bowel Disorders in the same
family but not as severe as ulcerative colitis.
(This is not IBS, irritable bowel syndrome).
The body tries to heal itself by creating inflammation but goes overboard
which results in all the symptoms.  For me it's more very uncomfortable rather
than horribly painful, no sharp pain at all but a pain the the patootie nevertheless.

There is no known cause, other than it is typically hereditary and if not
the same disorder, something else autoimmune.  Also, while stress does not cause
it, stress contributes to the severity of the symptoms.  So, even if there
was no stress before, now the stress is wondering if it will ever clear up
and I can go back to normal, or as normal as I ever was!

My gastroenterologist sat with me for an hour during a follow up visit
after I had my a colonoscopy.  He explained everything, drew pictures,
went over my actual photos taken during the colonoscopy and calculated
my typical fiber intake by reviewing the last couple days of meals.
(I was thinking of adding my colonoscopy photo to Facebook,
Can you imagine reading:  "Kathy changed her profile picture" Ewwwww!)

Now I have known I have diverticulosis for a few years. He tells me everyone
will eventually have it but it just depends on how old you are when it becomes
a problem. It's where little pockets form in your colon and can capture bits of
hard material such as seeds or nuts, leading to infection and inflammation.
Their newest theory is to not worry about what you eat but I know I can never
eat popcorn again and most nuts.  I've been in terrible pain in the past and would
prefer to avoid it in the future. This led me to shy away from a lot of whole
grains and fibrous foods.  That; however, does not work well with
my IBD problem.  So we changed my diet.

I have to eat between 12-15 grams of dietary fiber daily, either
from supplements such as Citrucel or from counting the grams
in certain foods.  He provided me with a list of many foods that
have a good fiber content so I have been tracking it daily using
13.5 as an average intake.  To the side I have added a column to say
how I am feeling, hoping to pick up a pattern.   You can see I
am ahead of goal so have some wiggle room if I want to vary
from the items I have chosen.  Animal products- meat or dairy- has no
dietary fiber but I can eat an egg in the morning but may pair it
with a one small oatmeal packet or later in the morning, a
Fiber One oatmeal cookie which is loaded with fiber and delicious.

I have found that this diet makes me full.  I don't snack a lot
other than the fiber cookie or bar that I schedule in the day.

Some that suffer from colitis are put on oral medications but they can't treat
mine that way so for three weeks (!!!!) I have to use a medicated enema which
is done at night where afterward you have to lie down for hours
so bedtime is the best time.
Yes, I have to do this myself and it is not easy!
Thankfully, I have insurance because the medication retail value
is $450 for 3 weeks, and you might need a second set of treatments.
I can't imagine.

I keep telling myself that it could be MUCH worse.
This could require other solutions but rarely ever turns into cancer.
I have also found several other people who have similar problems,
some are my co-workers and I had no idea. Not that I want
them to feel bad but it's nice to be able to discuss it and what
works well for others.  I tend to tell my boss and co-workers
everything so in case something happens, someone at work will
know what is going on with me.

To complicate matters, after my leg problem where I pulled
ligaments, now the opposite foot is killing me, having a large
lump in the middle of the top of my foot.  It is either arthritis
from all this darned rain (it will never quit, will it?) or I have
stressed the good leg too much when it was compensating for the bad.

I believe I need to travel to England and go to one of those
rehabilitation centers you see in vintage movies where they are
wrapped in warm blankets, stretched out on chaises lined across porches
that overlook the sea.  They would bring me tea
and some of those nice cucumber sandwiches on rye
that have capers and thinly sliced onions topped with a dressing.
Yes, that is exactly what I need but with my luck, it would turn
into an Agatha Christie novel and I would discover the body in my
closet!  Sigh.

Next steps-
I will be going to Denny's on my birthday for that Grand Slam breakfast,
even if I have to use my husband's boat to get there through the
heavy rains that are expected during the next couple of days.
You see, the free breakfast, which has become my birthday
tradition, is only good ON your birthday.  Not the day before or after.
So, breakfast and coffee it is.  I'll not make my fiber goal on Friday!

After that, I'll worry about healing.
I need a break
or a frozen mango margarita*!

Well that stinks, but the way life has of working things out, you'll probably just end up healthier than ever. Enjoy your Dennys!

Last year we got hooked on pina coladas during a stay in Hawaii. They at least make striving for goals a lot more fun. - Margy

Boy you know how to live it up on your birthday!
...and with Denny's coffee, blech!
I like the England Rehab overlooking the sea best of all. That had me laughing.
I feel bad for you with all the health issues. I know how you feel. I've got some issues myself, as I explained in my email the other day. Thing is... It's improved somewhat over the past few months! I've incorporated Kefir, Kombucha and cultured veggies into my diet. The probiotics seems to help my bowel the most over everything else I've tried!
I hope you're able to get some relief.
Give your foot some rest too... Heck, even if you CAN'T TRAVEL to England...pretend like you're there and maybe somebody will pamper you a little...OR! THEY'LL GO AWAY AND LEAVE YOU ALONE FOR A FEW DAYS.
Which is sort of like a vacation, right?

Goodness I hope you are feeling better soon and that it will be easier to handle this condition.

I need an English rehab !! I also went to Denny,s on my birthday. The waitress was kind enough to let me know I could now order off the senior menu. Yes I still tipped her.But I did think twice about it. LOL

Have an oatmeal cookie with your breakfast and there is your fiber. ;-)
*hugs*
God bless and stay safe. ♥

My mom has a similar condition. She's 87, and they keep it under control with diet and medication. I hope you don't suffer too much from the problem, and I'm sorry you are having to deal with it. Seems like it's always something, doesn't it?

I'm sorry to hear this Kathy. But it could be worse as you say. My prayers for you. Hopefully you'll be able to minimize the discomfort.

"I have to use a medicated enema... Yes, I have to do this myself and it is not easy!"

Tell that ole man of yours to bring home a 3-foot length of plastic tubing from the hardware store, attach one end where the sun don't shine, put the enema in the other end and blow! (I saw it on the Three Stooges once, so you know it must be a good idea!)