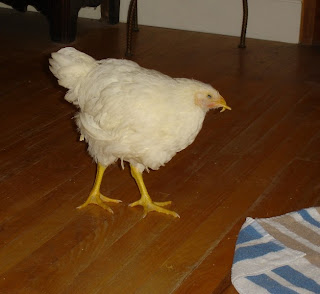 We've had some pretty scary moments with Bird lately.
She had another seizure the other day after
being free of them for quite some time.

Everything was going along just as normal
then I put her in the utility sink for her regular
after dinner drink but she couldn't maintain
her balance.  She would lift up her wings,
sort of like you were holding out your arms to balance,
and then she would shake continuously.

Her non-eye, the one that was never there,
opened!!
Well, not the eye itself because I don't think one exists.
But the thing that looks like a little bone is actually
a teeny tiny eye lid!
And it opened.
Just a speck. About the size of a pin head.

I wrapped Bird in a towel and my husband and I
took turns holding her over the next hour or so
until she was calm enough to go into her tubby for the night.

The next day she was fine,
as fine as Bird can be considering her unusual condition.
I got all sorts of prayers through Facebook
and they seemed to work.

Here she is today taking a stroll around the living room.

PS-- for some reason Facebook shows a preview of a
dumpster for this post instead of Bird.
Strangely enough, there is no dumpster in this post.
So, that being said, I am going to load a photo on
top of the video so no one thinks Bird took a stroll
in the dumpster!!!!

It would not let me load the photo on top so I settled for below. Facebook is strange.

Facebook is usually messed up one way or another.
Bird is looking good. :)
Hope you all have a wonderful Sunday!

Poor Bird! I got my wife to some see Bird walking on the video. M is a special ed teacher for severely handicapped, she wanted to pick Bird up and give her a big hug. I told her Bird was doing fine. Then I read on and saw Bird was not doing fine. I felt bad. Having just lost Chloe the Ferret I am even more sensitive than usual to small creatures with difficulties. But you are taking good care of Bird.

She looks normal and healthy in the video. Yeah, I'd like to hug bird too. Poor thing. But if I did, I'm not sure I could ever eat chicken again. ;)

Awww! Thanks for the video. She's got spunk.

Thank you for sharing with the Clever Chicks Blog Hop, Kathy!