No Romance for Squash Bugs 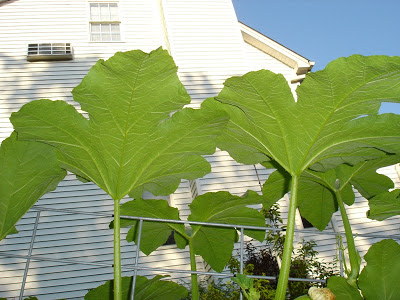 My squash is getting huge!
To combat the squash bugs, which have already made an appearance,
we discovered weaving them around the cattle panels tended to
reduce the number of squash bugs plus the eggs laid  beneath the leaves.
In fact, it makes it even easier to see underneath them
when they are growing upright.
I was standing up as I took this photo. 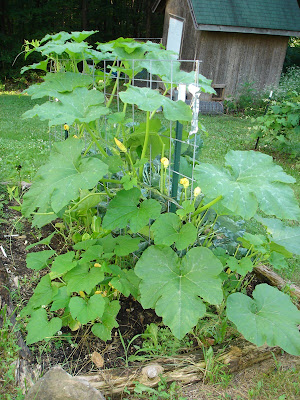 I still keep my trusty duct tape to remove the eggs
although it sometimes damages the leaves but
much less than allowing the eggs to become nymphs.
These leaves are enormous! 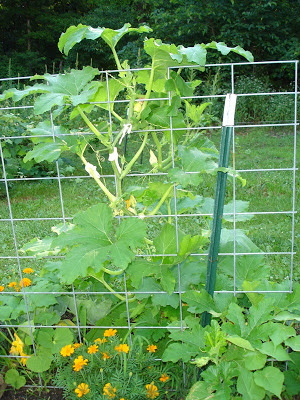 I have several squash varieties growing as well
as some marigolds, volunteer eggplant and
the remaining cabbage and collards.  The lettuce
has pretty much bolted except for some romaine
that was buried beneath the squash leaves.

The larger garden has some ground level squash
as well as some which will be trained to the panels.
I'm very interested to see where I find more bugs.
When I disturbed the soil in the large garden,
where the squash bugs flourished, I found some
mating and promptly put an end to that!

No romance for squash bugs here!

Die squash bugs, DIE!
I spent yet another sweaty afternoon trying to pick/squish/drown those darned squash bugs. I like the idea of training the plants to the cattle panels (what CAN'T you do with those panels?!) because it does seem that they congregate under the lower leaves or those that are wilting.

I have great big beautiful squash plants that are bursting with blooms but very little squash fruit. Not sure why they are not producing fruit. I guess lack of pollination. I love the way you have them growing upwards.

I have some squash growing up like your plants but they aren't large enough to tell any difference, that will be great if it helps with the bugs. The stem bores are what kills mine, a moth lays the eggs at night and the worm eats the insides out of the stem and upper root area. I try to cover the stems with dirt but have been spraying some this year.

I dislike bugs, too.
Thanks for the fencing tip!

This is a cool way to do the squash. I am going to try it with mine.

I battle squash bugs every year. This year wasn't too bad as I pulled the coppery eggs off the leaves as I inspected the plants daily. I still have the darn pests, but not enough to destroy my plants as previous years. I have an ample supply of cattle panels - I'll certainly be trying your method next year. Genius! (visiting from Down Home hop)

My zucchini and yellow squash produced massive amounts this year. Unfortunately, they have pretty much succumbed to the squash mosaic virus! Oh well, I have a freezer full of shredded zucchini just ready to make bread and muffins this winter! I really like the way your squash is so far off the ground. That would sure make tending to them a lot easier!

I planted my squash on the outside row of the garden this year in hopes of it climbing. I'm assuming you have to coax it and tie it to get it started. Your garden is so much further along than mine.

Yes, as the vines get larger I take old stretchy hose like socks- dress socks that I no longer use, and cut them into ribbons and tie the vine to the panels. I wear garden gloves because the spines hurt. If the vine gets too big it will break off so tie as early as possible. Had I thought better I would have planted them on the side of the panel where the vines would naturally follow the sun, as it is they want to go the other way.

About pollinating- I have been known to take a Q-tip and do the job myself just in case.

My little side garden is doing great but the big garden is a mess- really, a mess. There has been so much rain that some plants have become overwhelmed, tomatoes are fine but the grass has grown out of control. Even the farmers are having a difficult time here in MO (near STL).

What a beautiful garden! The weather is sure making it difficult this year for a lot of green thumbers!

I didn't realize that you could grow squash like a vine plant. I am going to go rig up a tellis for mine tomorrow! The leaves are getting so big I can't see under them and they are covering the smaller plants nearby. Thanks for this post!!!

Your squash look great. Do you eat the flowers? Italians do. My mother has mixed them into an omelette. Or place them inside dough and make zeppolies.

I've not eaten any blossoms yet but I hear they are wonderful. Won't I lose the squash though?

Hi Kathy. It took me a little while to find the answer to your question. I didn't think it did (my mother would never lose squash over a blossom) but apparently it does. However thie person said this:
"You can pick either the males or the females. The females would have a small squash attached to the flower. The females will have a stem go directly to the flower.

If the plants are in full flowering there will be many more males then females so you can easy take a few males with no loss in squash production. "

So that's why my mother never lost a squash over the blossom.

I should have realized! I knew the female/male thing but didn't reason it out enough to think about picking only the males. Good thinking Manny's Mama!