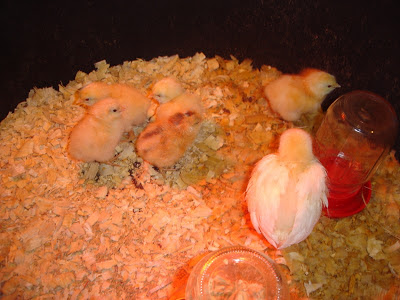 It was a happy birthday, for all six of us--
Five new hatchlings and one old me.
I've moved little cross beaked chick in with the babes,
he's a better fit on size and they seem to like
his company--after an initial peck or two. 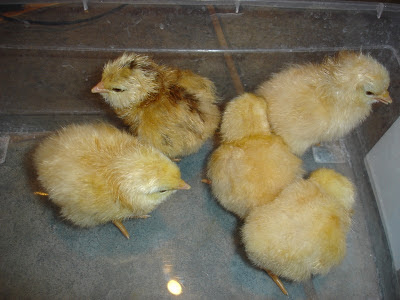 The five are settling in quite nicely
immediately pecking and scratching in their
new brooder. I noticed that the one  very similar
in coloring to the older chick that mysteriously died
is also not as active as the chicks that appear to be
full buff orpingtons.  Maybe whatever cross
this is isn't as strong?  Time will tell. 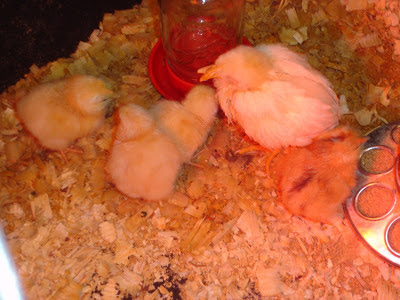 He is able to peck and eat the dry crumbles now, I think.
It was not working out with the mash since he got bigger
and would overshoot the dish (as he is blind).  It was
getting to be an hour operation to get food in his beak.
Right now he is in a smaller tub that has deep crumbles
and is happily pecking and hopefully getting some in  his
tummy!   What a wonderful thing- I may have time for coffee again.

I've not posted or read much lately, too much work between
chicks and garden plus the deep dive cleaning we just did.
We have company this weekend too so it will be busy!
I've a couple more eggs in the incubator but no signs
they will hatch but if so I'll be posting more birth announcements!

Posted by Kathy Felsted Usher at 6:10 AM

The new babies are adorable. Cross beak looks like she's succeeding at getting food in her tummy too. I hope younhave more hatclings soon.

Awwww your babies are adorable and cross beak is so cute. Congrats on all your wonderful work with him/her x

I have a Thush chick that I am currently raising, time consuming aren't they!!! x

I'm so sorry about the chick! I hope it's treatable.