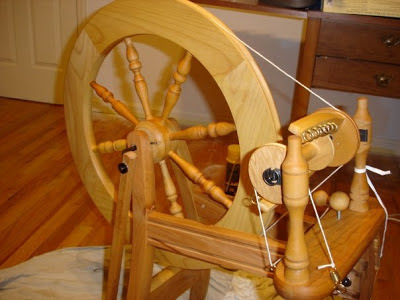 I AM going to do it this time.
I will not fail. No matter how long it takes!
I  responded to a Craig's List posting for llama fiber
not more than 5 minutes from my house,
somewhere I pass all the time. 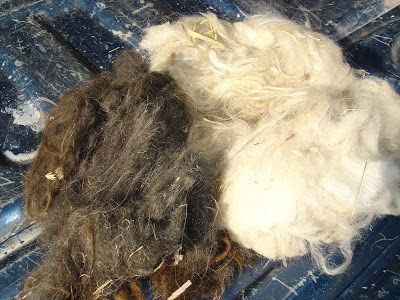 I saw the posting early in the morning and e-mailed my reply
indicating if she did not have a buyer, I would be interested.
I got an email reply right away and she sounds like my
kind of person!  As it turns out she runs the rescue center
up the road and it was shearing time.  Whoever had
indicated they wanted the fiber never got back to her
so it was up for grabs.  As we talked on the phone,
and found we have very similar opinions on things,
she told me the fiber was mine for the asking.
She just wanted someone to have it that would actually
try to do something with it.
And I will. 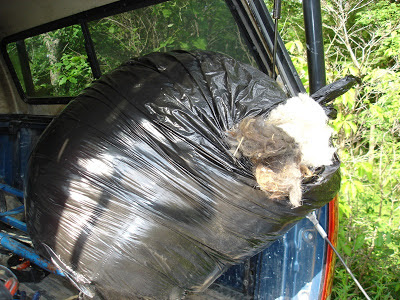 I  was working from home so I was on the clock,
unable to run out and pick it up before she was leaving;
however, my husband returned just in time for me to send him
and again, literally 5 minutes away!
I had NO IDEA it would be this much.
I am thrilled.
If I can make this work, I'll make her a scarf! 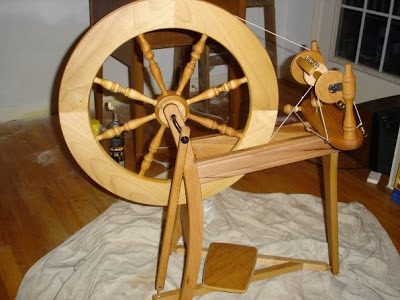 This is my spinning wheel.
Hopefully it will be spinning it's little heart out
after I've finished cleaning and carding the fiber.

UPDATE:
As it turns out I found where the owner of the center went to school-
William Woods College (now University)  in Fulton, MO.
That's my school too!!! We're both Woodsies.
It has an amazing equestrian science program.
Small world!

Preppers often think food will be the only problem if society crashes. Long term, I think clothing will be the hardest thing to furnish your family.

How wonderful! Good luck, Kathy! Have a great weekend, too. ♥

I wondered if you could spin wool from llama's. I am considering raising either llama or alpaca. I'll be watching to see what you make with it.

Yes, you can spin out of almost anything, even long dog hair- which I have not since I can't figure this thing out yet! If the fiber is too fine you can mix it with other fibers such as wool. I probably need to just pay for lessons and load up the wheel. There is a good place up in north county, about an hour from me. I tried it in their store and could do it fine but you know how it is, you get home and then think, now what was I supposed to do???

There is a lovely elderly couple that live near me and they raise llamas. They do demonstrations from shearing the wool, combing it out, spinning the yarn and finally crocheting the yarn into beautiful hats, scarves, and sweaters. I was so amazed! I often thought this is truly becoming a lost art. Kudos to you for learning how to spin the wool!

It's all just practice, Kathy. Llama fiber is great to start out with. You'll be hooked in no time and spinning like crazy!

This is so exciting. I am so happy that she gave it to you. I hope you get the spinning wheel figured out. This would wonderful!

This is soo cool Kathy!

I think you're gonna do it for sure!