WARNING, This is graphic
We are prepping the ground hog for cooking. 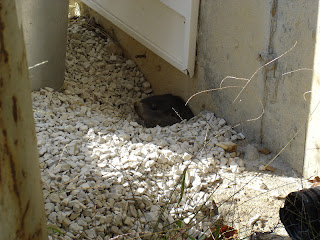 You all remember the ground hog that decided to make a den beneath our foundation.  This causes serious damage to the house.  There is a link to the type of damage they can cause to both crops and foundations.  While they are cute as a button, they are a serious threat.

Groundhogs can do a considerable amount of damage to property. The primary damage caused by groundhogs comes from their incessant burrowing in unwanted areas. These burrows are where the groundhogs sleep, rear their young and hibernate. The burrows are extensive, sometimes having up to five entrances, and can contain up to 45 feet of tunnels; the average burrow depth is five feet. Because the burrows are so extensive they pose real risks to agricultural crops and can even undermine the foundations of buildings. Groundhog burrows in agricultural areas are a particular threat to farm equipment, which can sink into them and become stuck. Horses, cows or other farm animals have frequently broken their legs by stumbling into groundhog dens.

They will also eat crops and can devastate both large scale agricultural harvests as well as your backyard vegetable gardens. If they burrow beneath a deck or near a foundation they will gnaw underground cables, causing electrical problems and headaches for the homeowner.
Groundhog Link 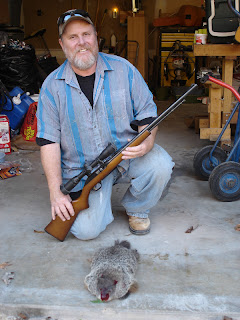 This is hunter Tom.  Not the trophy deer you might expect, more like a big squirrel, in fact, ground hogs are closely related to the squirrel family.  He insisted that he should be the one to shoot it as he had more experience and he was right.  One shot for an instant kill so it would not suffer. 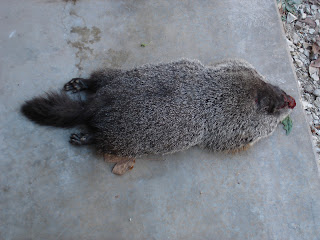 It is rather soft and, being in the squirrel family, clean like a squirrel.  We were warned that there are some scent glands that would need to be removed so we had to be on the lookout for them although I had no idea what they looked like.

Why am I doing this some are asking?  This isn't exactly what Mom had in mind for me but she is forgetting one thing.  Her mother knew how to butcher meat for her family.  When she made turtle soup, she started with a live snapper, killed it, shelled it, cut it up and cooked it.  My grandmother's mother and her mother's mother also knew how to feed their families when times got tough.  In the last 100 years many of us have lost that knowledge, relying on products in grocery stores and fast food joints that are feeding us who knows what.  I need to know what to do.

I've never butchered anything in my life, not even cleaned a fish.  I have helped process deer and hogs but I have never been on the live end of it.  This is my first.

The first thing you need to do is tie up your hair.
Then get into big and baggy old clothes.
If you can hang up the ground hog, that would be best but we had not counted on doing this today so the hubby lent a hand with the holding and our neighbor gave me tips on how to use the knife.  I don't think he believed I could/would go through with this. 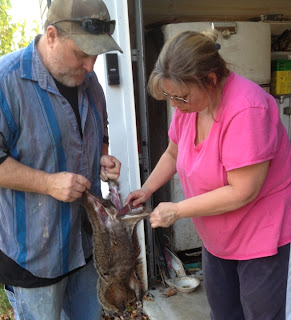 You slice around the legs and pull the skin out a bit.  You can actually "shave" off the skin, it was easy.
The insides were a bit more difficult as you have to make certain you do not cut into the intestines.  Given that this was a clean head shot, there was no blood in the cavity.  You do have to reach in and pull out the insides, like with anything.  The stomach and intestines fell out for the most part except for the part where they were attached.  I had to get out the liver, heart and lungs.  That one was different.  Chicken from a grocery store has all sorts of innards but never lungs! 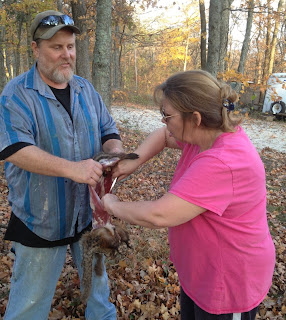 Cutting through the sternum took some pressure.  I really had to pull.
I let my husband do the head.  His knife is very sharp and it took lots of pressure.
Yes, I look like crap.  Please disregard LOL! 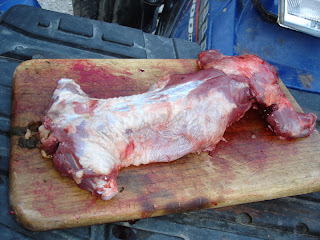 Here is the first peek of the skinned ground hog.  Now it was time to remove the fat and cut it up. 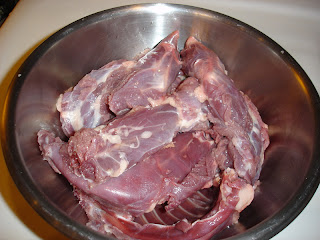 Then I covered the meat in water and added salt to get the wildness out.
Recipe to follow in part three to avoid the images here for those that would prefer not to view them.

Wow, that guy looks like he's got a lot of meat on him (not your husband or neighbor, the wood chuck!!). Or is it ground hog? Think they're the same thing. Anyhow, I think you deserve a great big "Att'a Girl" for doing this. And you're right; it's sad that in only two (sometimes only one) generations we've lost the ability to hunt, kill and cook animals. Looking forward to the recipe and how it tasted!

Good for you guys Kathy!! He was a big ol' honker! I can imagine it would NOT be a good thing to have something that big digging tunnels under the house. Yikes!
Sadly, I am one of those who doesn't know how to butcher and clean animals either, not even my chickens.
On another note though, yours is the THIRD butchering post I saw in one day! I keep telling everyone that all the blood and guts must be in preparation for Halloween! LOL!!