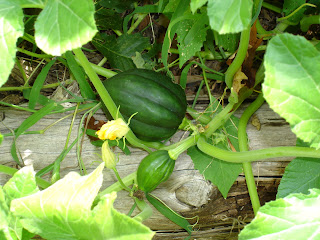 Our neighbor came over to apologize, it was all his fault.
He both washed his car AND went camping.
You know what that means . . .
Rain!!!
Yes, Rain.
And what a rain it was.

My little acorn squash was happy, in fact, it had a baby! 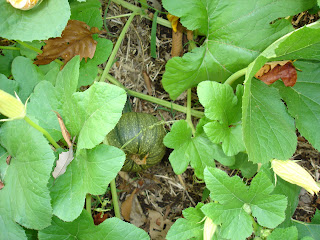 Hey little pumpkin!
Are you going to be Taylor's for Halloween ?

My priest apologized (??) too.
Maybe not an apology, more of an explanation
Within a half hour of singing Rain Down, the skies opened up.
It poured. It lightninged.  The winds howled.
The weather bureau estimated 70 mph winds were on the way.
Hail 2-3 inch in diameter possible.
They evacuated the Washington Town and Country Fair just as REO began to play. 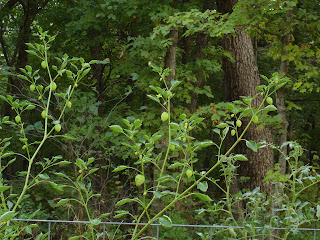 Tomatillos- just look at them.  Yummy salsa on the way.

My mom was in town visiting so Taylor, my graddaughter, was with us.
She's seven and about to start school again.
She was also terrified, tears were flowing. She doesn't like storms.
Storms in the dark are even worse. 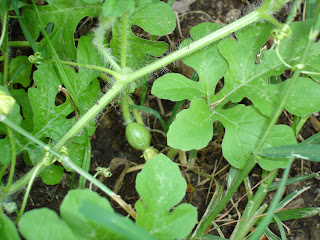 A little watermelon.  Will you grow to maturity?
Not so sure but keep trying!

It wasn't nearly as bad at our house.  We had strong wind and rain for sure.
No hail that I could see but it was hard to see!
Tom was at the ham radio so we knew we were ok.
The worst of it passed just around us but did hit Taylor's town.
Nothing widespread but we did get a CERT call that chainsaw teams were needed.
Large trees had fallen on a couple of houses.
Of course I had Mom and Taylor so we had to pass.
They seemed to have plenty of volunteers. 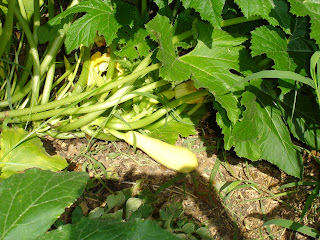 The ham radio operator in Pacific has a weather station.
He reported the rain was so intense at one time that it was falling at over 7 inches an hour.  It overwhelmed gutters, our neighbor came back to a washed out driveway and water in the garage.  I believe I heard their front porch area was flooded as well. 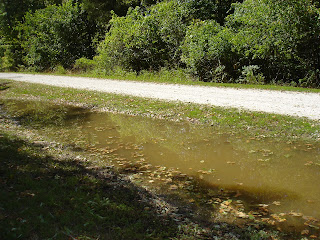 This is our culvert and it had been bone dry.
I stepped in to see how deep it was. I won't show you the photo- it's not very flattering- but it was about 18 inches deep.  This is the culvert that only fills when a great amount of rain falls.  Our patio fountain overfilled and the little frog pond on our garden wall was to the top as well.

The plants got a nice drink but we need a slow, steady rain for several days so the ground can absorb it, this caused a lot of runoff into the creeks and rivers.  It was still very much appreciated except for the wind damage.  It looks like we will get some cooler temps this week - LOL cool in the 90s!  Funny how I think the 90s are cool now!

Linking to
The Country Garden Showcase

We have the opposite problem. We need rain really bad. Everything is really dry. We have already had 4 fires from lighting storms from the high heat.

Rain is good but it is definitely better when it comes a little at a time instead of those big nasty storms! Yikes!!

Oh, it's been so dry here too. We've had major highways shut down due to brush fires. Probably someone throwing out a cigarette. Did you know new cars don't automatically have ashtrays? Not a good idea. Smokers will throw those lit cigarettes out the window!

At least you got some rain. Your garden looks good!

We got a some too, though not nearly as much as you did. You should see the huge cracks in the lawns around my house. The land is just cracking apart it's so dry. I've only seen that happen a couple of times in my entire 53 years.

It's supposed to rain at least once more this week, and last time I looked, the weather station said it would actually be down around 85% for a couple of days too. It would be nice if this signalled the end of the intense heat and the rest of the summer was normal or even cool.

Thank you but you should see the little side garden that gets full sun all day. Even the tomato vines are scorched. Then somewhere along the line, all the grapes that made it disappeared! Gone- those raccoons, I'll bet.

I'm with you= same age too! So dry. My garden retaining block wall is mostly filled with rock for drainage which means it doesn't hold much moisture. I can't keep ahead of even flowers. Our big garden is technically in a bad spot since we're wooded but this year it's helped because we get shade half the day. Won't 85 be nice!