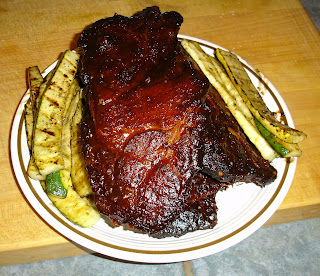 I left off in Part 1  with the pork steaks prepped and ready to go to the pit. So now I'd like to talk a bit about pits and fuel. Fuel first.

There are really only two ways to go with BBQ pits - gas or wood. While gas pits have their place (usually hooked to chains and used as boat anchors, but I digress) this isn't it. The only proper way to cook pork steaks is over a wood fire. Now, when I say wood I'm including charcoal. But I'm not a big fan of briquettes. More on that in a minute.

So what type of pit should we use? Well, traditionally the pit of choice was a home built 55 gallon barrel pit with the lid quartered out of it and hinged to lift up. There'd be a smokestack on the top with a damper and also a damper controlled air intake. The grill wasn't usually adjustable but sometimes was broken into two pieces so that fuel could be added. But these are just generalities. There were all kinds of different designs, usually depending on the skills and needs of the builder.

Today those steel barrels are getting hard to find so most people buy a factory built pit. The important thing is to find a pit that mimics the qualities of those old pits as closely as possible. That means a large, rectangular cooking area with a lid and air control dampers on both the input and output side.

Don't get me wrong. Any high quality pit can cook really good pork steaks. The Weber Kettle is excellent. It's just easier to cook 'em on a big pit with plenty of room to move around. You'll see why in a bit.

One thing you don't want to use is a vertical smoker. We're not smoking pork steaks, we're Bar-B-Qing them. Vertical smokers are pretty well designed to be used as smokers and that's what they do best. Sure, you can BBQ on 'em but it's not easy to get truly amazing results. 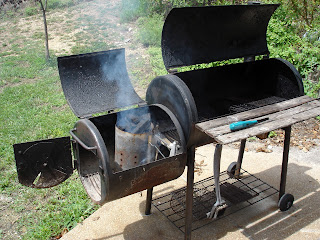 This is the pit I've used now for over twenty years. She's a bit worn for the wear but that doesn't matter. It's time for some fresh paint and a little wood replacement and she'll look as good as new. This is a New Braunfels barrel smoker. The company is no longer in business. I'm fairly sure that the company was bought by Char-broil but I can't swear to it. If you can find one of these online or in a garage sale someplace - buy it. Even though you can find smokers that look like this one at big box stores and other places they aren't the same thing. This pit is made out of 1/8" thick steel. It probably weighs close to 150 pounds. And that means that once it gets hot it stays hot. Consistent and even heat is really important. It makes everything more controllable throughout the entire process. Also, this pit has been out in the weather for over twenty years and, outside of needing to paint it every few years, it shows no real damage. A lightweight pit wouldn't be able to take the beating. 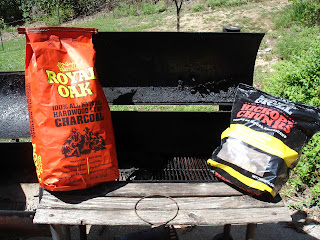 Back to fuel. I like wood. Real wood is the best. The thing is, you need to have access to it and know exactly what it is. All wood is not the same. Some can make your meat taste wonderful and others can ruin it with bitter flavors. We live on acreage and so I occasionally have a hickory or oak tree that I take down. I generally set aside some of the wood for the pit and use it. Nothing better than that.

Most of the time though I use charcoal. It's convenient and it works. I use lump charcoal, not briquettes. The reason for this is that it burns more like real wood and it adds flavor like real wood. Briquettes just don't do those things. I like briquettes for doing beef and other things that are going to cook quickly and with high heat. For pork I always use lump. 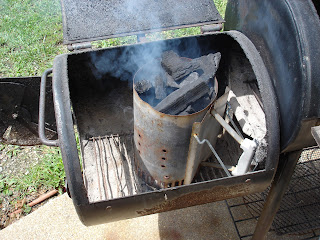 This is what lump charcoal looks like if you've never used it. It's just wood that's been turned into charcoal. No binders or anything else. Just wood.

Since I'm using charcoal I need to add some aromatic wood for flavor. I like hickory and it is the sort of semi-official BBQ wood of St. Louis. You'll see oak, too, but hickory is definitely the wood of choice. I don't like chips. I use big ol' chunks of wood, whether from my trees or from the store. I don't soak them in water, either. I want them to burn along with the charcoal. It adds heat to the fire and you'll get plenty of smoke flavor in the meat. I don't want the smoke to dominate everything else when I'm eating. 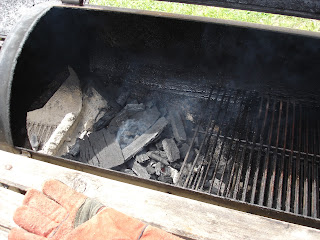 In the pictures above you can see the fire starter sitting in the small barrel on the side. I put it there mostly because it balances it better than in the big side. The fire will actually go into the big part of the pit. The small barrel is used to contain the fire when smoking meats such as turkeys and hams. It creates a truly indirect heat. But we're not smoking these pork steaks, we're BBQing them. So I want the fire close by the meat.

This is where the big cooking area comes in. I can put the fire in the big barrel close to the meat yet I have the room to get the meat away from fire. In a smaller pit, say the Weber Kettle, I have to build a smaller fire to cook the steaks in the same way which means I'm going to have to refuel it more often. A big pit lets me load it up and go. It also lets me have a hotter fire which allows me to manipulate the way the meat cooks by moving closer or farther away from the heat. There's a huge difference in heat from one end of that pit to the other.

It's finally time to cook. Throw some hickory on the charcoal, close the lid and shut the dampers almost all the way down. Let the pit heat up a bit, which it'll usually do in the time it takes to grab a cold-frosty and get the meat out of the kitchen. The hard work is done and the fun part is about to begin.

My husband has the same grill. He swears by it. I am sorry to hear they don't make them any longer. He was talking about getting another one.

Well, my stomach is starting to growl! :)

That's quite the process, but your photo says it's well worth it. :)

I could live on BBQ pork steaks and baked beans, though no one could live with me.