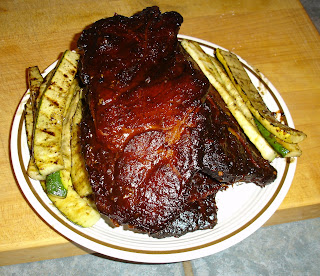 As I promised- a guest blogger and tutorial- The St Louis Pork Steak by Tom Usher, the hubby.  He's pretty serious about his pork steaks, coming from a family known for its BBQ.  This will be part one of two, or three depending on how wordy he gets- I'll make sure a few photos are scattered here and there.

I was watching CreateTV the other day and BBQ University came on. Steven Raichlen has a great show there. He does stuff over fire that amazes me. But on this particular show he mentioned a food that is close to my heart and one that is peculiar to my hometown, St. Louis, Missouri.

I'm a St. Louis boy from way back. My family moved into this area in the 1840's and we haven't left yet. I'm sayin' this just to establish my bona fides as one that knows St. Louis food.

We have some peculiarities in St. Louis. Actually, we have a whole bunch of them but we'll just stick with food for now. Toasted ravioli, pizza on cracker thin crust with Provel cheese, snouts, pickled pigs feet and Volpi sausage. And beer, of course, lots and lots of beer. You see, like me, St. Louis is a mix of different cultures and people, all having come here because St. Louis was the jumping off point to the great American West. The Italians, Germans and Irish all flowed into a city that already had French and Spanish roots. And it was also the biggest city in a slave state so we have plenty of African influence, too. All these cultures came together to create an area rich in food. And beer, lots and lots of beer. Or did I mention that already?

Anyway, all of these various cultures were hog cultures. The pig reigned supreme in most of the recipes. And not much ever went to waste. You wouldn't believe some of the stuff my German/Italian/Irish family has eaten over the years. Which brings us to one of the most St. Louis-y of all foods, the pork steak.

What's that? You say you've never heard of pork steak? Well, then, grab one of them hickory logs, drag it on over, flip it up on end, grab a couple cold ones out'a the box (did I mention St. Louisan's like beer?) and get comfortable. Let me tell you all about 'em.

The shoulder is the prime cut for pork steaks. But not just any part of the shoulder. You want a center cut. If you've ever smoked and pulled a shoulder you know why. The further you get from the center, especially as you move away from the butt, the more gristle and tough meat you start to find. It's entirely possible to do some great pork steaks with end cuts but you always take a chance.

Now, toughness is a relative thing with pork steaks. To say that the end is tougher than the center isn't to say that the center is tender, at least not in comparison to other parts of the hog. It becomes tender through slow cooking. And I mean real slow. It generally takes 5 hours or somewhere there about to BBQ pork steaks. Which isn't a bad thing as long as the icebox is topped off with, you guessed it, beer.

Nearly every recipe I see for pork steaks says that cooking time can be measured in minutes, sometimes all the way up to thirty of them. I've been eating these things all my life and have had them cooked just about every way imaginable and I'm going to say one thing and say it loudly - you CANNOT cook pork steaks quickly and get the maximum flavor and tenderness out of them. It just ain't possible! I've seen it tried, over and over. I've seen people that sear 'em and then put 'em in the oven to tenderize 'em. What you end up with is a relatively tender greasy piece of meat. I've seen people cook 'em like beef steaks, which is what I saw on BBQ University the other day. A guy with the skills of Steve probably made 'em taste fine. He's a highly skilled cook. But I'm going to say this without fear of being wrong - he left a bunch of flavor on the grill that could have been put in those lovely pieces of porky perfection.

So, now we're going to get down to it. I was taught to cook pork steaks by my old man, he by his and on back up the line. We cook 'em the old time St. Louis way, the way working class guys cooked 'em when they got together with their buddies on Saturday afternoons in back alleys and back yards, listenin' to the Cardinals on the radio and...wait for it....drinkin' beer. It ain't fancy and it certainly ain't fast but if you cook 'em this way you'll make converts of the many that swear pork steaks taste like shoe leather and aren't fit for dogs. And if you've never had 'em? Well, once you do you'll wonder why you ever wasted your time eatin' anything else. I promise. 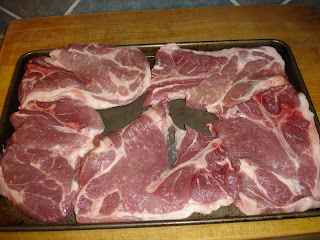 The picture above shows 5lbs. of center cut pork steaks. A couple things you need to pay attention to when you buy your steaks can be seen. First, look at the marbling. Notice that there is a fairly even distribution of fat throughout the meat. Also notice that the fat on the edges is nicely trimmed. A bunch of fat around the edges doesn't do a lot for the end product and you'll be paying for the weight. A little fat on the edges is good because it'll help to keep things a bit moister during cooking as it melts. One other thing I've found. When you're getting the steaks push in on the meat through the package. It should be fairly soft and when you push it in it should stay pushed in. I've found over the years that springy pork steaks are tough pork steaks. 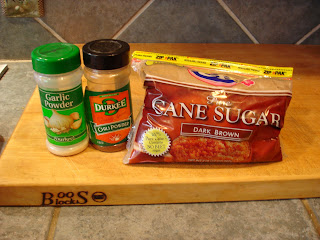 Preppin' the steaks is easy and completely up to the guy doin' the cookin'. I keep it simple. Some chili powder, garlic powder, onion powder (we were out this time around) and brown sugar. You may notice that there isn't any salt. There's a reason for that and it's something I do that, well, is just a bit unusual. Before I add any other spices I use a sugar cure on my pork steaks. It's made by Morton Salt and is the same cure we use to cure hams and bacon. It's applied at a rate of one tablespoon per pound of meat. I rub it in evenly on the meat and put the meat in the icebox for about three hours. If you decide to do this DO NOT add any salt at any time during the cooking process. Cure will make the meat salty enough. If you've ever had country cured ham that's the taste and level of saltiness you can expect from doing this. I like the taste and so far nearly everyone that's had it likes it, too. It will tenderize the meat and also give it a pink color, just like ham.

But this is purely optional and is not essential to cooking pork steaks. If you don't use it then just salt to taste.

One other thing about using cure. After it's been in the icebox for three hours or so take it out and use running water to thoroughly scrub the remaining cure off the meat. If you don't it will be inedible. Completely dry the meat before applying the rest of the spices. 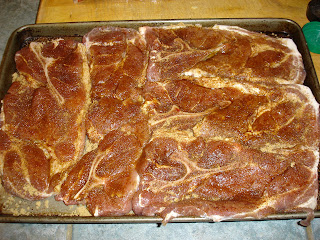 The picture above is the pork steaks all seasoned up and happy, ready to go on the pit. In part two I'll go on a bit about the types of pits that work best and the fuel to use along with the indirect high heat method I use to cook 'em. Thanks for reading this and I'll see y'all tomorrow. Keep the pits smokin'!

It's great that you post this. I have a few blogs I follow that do a lot of smoking. We bought a smoker and tried our first ribs that way, even though I was totally clueless.

I did not know you're supposed to wash the extra rub off. Oops.

Also, we only had light brown sugar, though I see that you, and others use dark brown. Is there a particular reason or is it just taste?

In spite of my mistakes, and the cheapness of our smoker, we definitely want to do it again. And try other meats!
Hope I remember to look for your update later.

You only need to wash off the Morton's cure, which is an optional thing that my husband uses. It's exceptionally salty, you use it to make ham. He has cooked them both ways, both equally as good but if you use the cure, you have to wash it off.

If you don't use cure, then you season normally and don't wash off your brown sugar, spices, etc.

I use the dark brown sugar because, well, I wish I could give you some sort of really detailed and well thought out reason but truth be told it's because that's what I generally find in the pantry. I've never used light sugar, in fact I never even knew it existed 'til now. So I have no way to comment on it as far as using it with pork steaks goes.

The other reason I use brown sugar is it helps to bind the other spices to the meat and it caramelizes. All that darkness you see around the edges of the pork steaks in the picture at the head of the post isn't burnt meat, it's caramelized sugar. It adds another layer of flavor and complexity.

I'll get into this a bit more in the next post.

Hi
I foward wait for next part of this post :)
This is professional advice.
I love your blog! There is so many interestand things..
I greet Ilona

Now I'm going to 'follow' your blog to find out the rest of this recipe :)