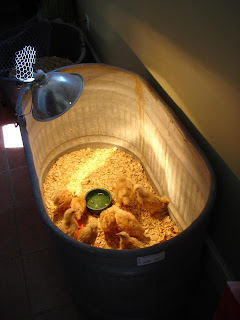 Poor Little Chick.
I had been tending the garden and
working on my Buck a Block quilt squares
not paying any attention
to the little guys.
When I went downstairs to answer the phone
there she was-- bloody, pecked
but not to death!
I picked up the little one and held her, keeping her warm and safe
until my husband came home.
"We have to find another tub for her or they will kill her!"  I cried.
I said I would have to sit up all night holding her.
He scrounged up something temporary.
Not because I threatened, it would be ok with him if I stayed up all night.
He says these things happen.
I know they do, but she's such a cute little chick!
Today he got them a new home, a bigger home.
I guess it pays to be a cute chick.
Now they are not pecking at each other, at least not yet.
I got them some big rocks to jump on so they won't get bored.
I don't know what other "toys" they might like.
I hope the coop move will go OK, we've lost them before to the bigger ones.
He's going to have to rig something up to keep them separate for awhile.
I know they may be dinner in a few months, but for now they are happy.
Posted by Kathy Felsted Usher at 7:12 PM

I am so glad they're all doing okay. We are kindred spirits Kathy. I'd be up all night with my baby chicks too, if they needed me. I am praying that your move to the coop goes well too. Years ago, my hubby took some of the large 1" silver colored jingle bells and hung them from the ceiling by wire and our hens used to love playing with them. They'd hit them and get a kick out of the jingle.

Aww...Last spring, my oldest son hatched out eggs for a science project. (Really, this need for a science project came at a great time, because I'd been bugging my husband about getting some chicks, and he balked...but he COULDN'T balk at a "science project. haha) Anyway, All the chicks hatched out either brown or black except for one little white chick. That little white chick was constantly being removed from the rest of the chicks by me because they just pecked at the poor thing all the time. That chick survived, and he's now out in the pen (the only rooster that we didn't eat,) and he's the Papa of the eggs I currently have in the incubator. lol. Good luck with your chicks...ours won't hatch out for a couple more weeks. =)

Poor thing, but one lucky duck . . . er, rooster! Last time we did this we ended up with 4 roosters. My son wanted to keep them all, in the house, as pets!!! He's now 25 and I don't think he'll ever get over it. Good luck with your new guys once they hatch.

I know they are being raised for food , but I always have a hard time getting past that, even though my father raised 500 rabbits for food and I ate them without so much as a peep. No pun intended. Well I guess it's best to not get too attached to them and give them names. Was that little chick the runt? I am a sucker for a sickly runt. That's how I ended up with my precious dog "Baby". She was sickly and beat up and scarred from being pushed to the back of the food line. Now she is fat like her momma. I hope all works out with the chicks!~Ames

Thanks. Yes...Part of me wanted to keep all the chickens...roosters included, but we had like 6 roosters all together, and they started fighting like crazy with eachother. My neighbors had gotten meat birds last spring, and were planning to butcher them, so I collected my roosters in a dog crate, and took them on the field trip of no return. I learned to butcher chickens that day. ;) Not nearly as bad as everyone says it is. Totally doable. =)

I've heard that if you use a red heat lamp it reduces that sort of pecking thing.

There was a guy who drowned a couple of days ago in Illinois after being attacked by a big swan. Must be something in the air with these birds.

More room should help and also make sure they aren't too hot. When we integrate the young chickens into the flock, we put up a barrier for awhile so they can get used to each other. I hope all goes well from now on! :)

No, not really. Maybe she had a scratch or something. We've noticed that all our chicken will go after a scab or any blood drop. Ha, Ha- maybe they are vampire chicks!

Yes, we just put one up and you can't see the blood spots with the red light on them.

Must have been a pretty big one! Maybe as big as the swan boat our neighbor has on his lake, it's a two seat paddle boat that is a giant swan. What a horrible obituary that would be! I think I'd have to sit still a really long time before these little guys could peck me to death.

Oh no, I just thought of something. It really WAS his swan song!

They are doing better now. We've got to figure out that barrier. I think he should build a separate smaller coop that is temporary and then divide the yard giving them a third but so they can see each other. Not sure we can do that.

Hope she continues to improve. I had to quit eating meat when I started loving so many animals considered livestock. :-)

So far, so good! I just took her out and let her play.