The Threads that Bind our Family 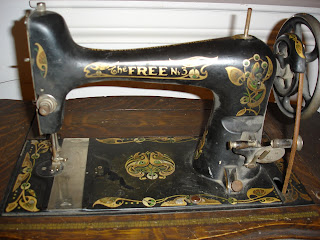 My grandmother's treadle sewing machine sits next to our breakfast room window, serving as a perch so our cats could enjoy watching birds that fed at our various feeders hanging off the deck. We will be moving it up to the "girl cave" now that our indoor cats have sadly passed away.

We have pieces and accessories, all in their original box, tucked up in the attic, plus resources for replacement belts. It unfortunately has some damage on the top of the lid when at some time a hot iron was placed on it. The lid folds over the machine when closed so it is not visible when opened for sewing. I hope to practice using it in case I need a quick mend and the power is out. 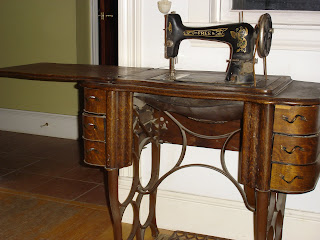 We also have the next generation of machine (below), the link between treadle and modern electric, adding a motor to the treadle. They serve, folded up, as end tables in our living room on either side of the couch. This one was my husband's grandmother's, on his father's side, and she too has all the components, the service records and even spare needles purchased from Famous Barr. This one has a lever that drops down from beneath the machine you press with your knee rather than using a foot pedal. 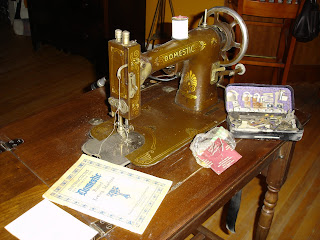 We have the service record and instructions, all perfectly organized. 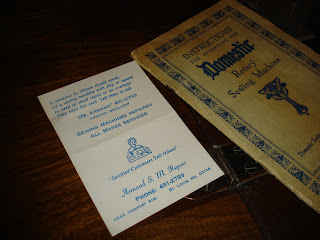 If you click on the photo you can read the clever slogan/jingle of the repair service. 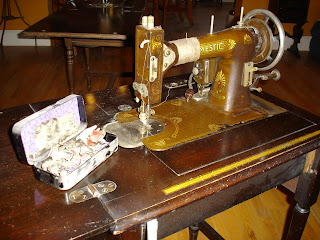 The other machine was owned by my husband's great aunt Nana on his mother's side of the family. We were surprised to discover they were the same brand- must have been popular at the time. This is equipped with a foot pedal and she has sewn a piece of fabric around the body to hold her needles. A clever idea. 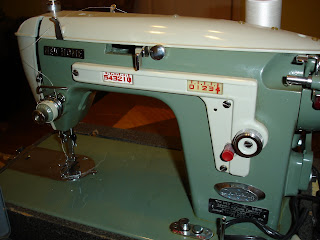 This beautiful model is called New Home, a gift from one of my former neighbors. It is all steel, a very heavy portable, sort of modernist industrial, probably from the 50s or 60s when things were made well, to last. 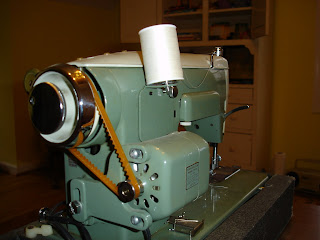 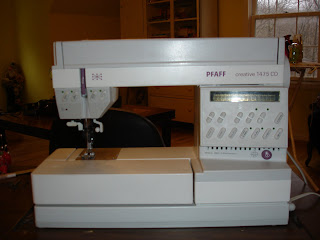 This is my current machine, a Pfaff, purchased at an extreme discount at $300, including cabinet, from a Singer dealer who took it as a trade in but does not service that brand. Price new ranges anywhere from $2,500 up based on what I see on line. This is the machine I am quilting on but it also does embroidery. I need to read the instruction manual because there are many beautiful patterns that are programmed, or you can design and program your own.

You would think that I knew how to sew having all these machines but truly, all I could do was sew a straight seam. Quilting uses straight seams so far- perfect! 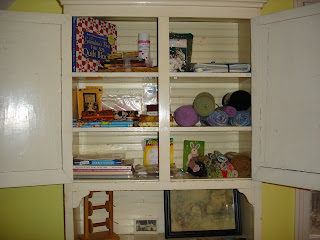 My project cabinet starting to fill up. Drawers containing needles, notions, rulers and patterns. Shelves of yarns, pillow kits matching my quilt project, fat quarters and transfers. I also have a rolly cart with slide out basket drawers filled with remnants for future projects.

Will C Free sewing machine link: In 1895 the Illinois Sewing Machine Co was founded using assets from the former Royal Sewing Machine Co of Rockford, Illinois. Will C. Free became the president by 1910, and organized a parent company - the Free Sewing Machine Co. Production continued in Rockford until 1958, when it relocated to Los Angeles, California. Manufacture finally ceased about 1969.
Posted by Kathy Felsted Usher at 11:18 AM

My Nan (Dad's Mom)had a Singer Sewing machine and Dad bought one, when I was about eleven. Being a competitive bugger, even at that age, I used to race people to thread it, the quickest. I won!

It's a bit like reading a road map, threading them, isn't it? Your new machine looks more like a computer to me, well out of my depth!

Yeah, mine too. I have no idea how to use it other than to sew normally. I don't think it is hard, just dial in the pattern and aim.

Cool. We have several aged sewing machines in the family, all of them Singer, and sadly, I know how to use none of them. My mother, like my grandmother, is the expert seamstress.

I loved my mother's old Singer. My uncle was a Singer repairman, so it worked beautifully.

How interestig. I enjoyed the progression of technology. I happen to be a mechanical engineer (at least in my day job ;)) so that kind of stuff intrigues me. Yes, they really did build things better in the 50's and 60's. After that they started using a lot of plastic parts, and while that keeps the price down, it does feel flimsier.

If I had come across the same deal you did on the purchase of your Pfaff, I'd never come out of my craft cave. It's not good to approach Lent green with envy! I can't wait to see what you are working on next.

I have a table runner started so I have something to do between quilt blocks. It's only a couple more months (BOM Club blocks) and I'll be working on the finishing kit and backing! This latest block (12 inch block) has 72 pieces to cut and sew together!

Loved seeing all your wonderful sewing machines. I am an avid sewer and have a number of sewing machines, including a treadle, and a sewing machine for shoe and leather repair...they are indeed treasures, aren't they? Your treadle is unique in it styling, love the round cornered drawers, so lovely. Thanks for sharing.

What a beautiful collection of machines you have. I rarely sew, but have still managed to acquire 4 old sewing machines in the last 6 months. I just think they are lovely to look at!

I'd love to have you join the party & share your stories at Knick of Time Tuesday!

How wonderful that you have such beautiful vintage sewing machines...and even more so since they once belonged to loved ones. Your "girl cave" must be pretty large to accommodate ALL those machines and STILL have room to work. ;)

Thanks for linking to Time Travel Thursday. I would love to have you join the fun each week.

Do you have any idea what year The Free was made...I just purchased one. I think it is beautiful. Now I am curious about age and parts.Very nice collection. Nice to see there is someone who appreciates vintage machines.
Thank you,
Teri

Ours has all the parts but I'm sure you can find them on the internet somewhere. I know Singers are more plentiful but surely these are available too.

I have a machine that kinda looks like that Free. I'm trying to figure out how to thread it. You wouldn't have a pic of that, would you?

The bobbin is long and thin, not round. We found a manual on line, you can google your brand and see if they have one and then print it out. It will give you step by step instructions with images. I don't know the web address for mine, I have a PDF. If I find it I'll post.