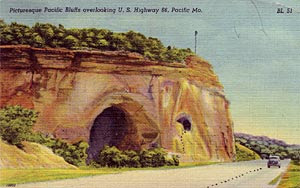 The Travel Channel is coming to town- Pacific, MO, that is. We live just outside Pacific and would consider that "town" if anyone were "going to town." While it's a small town there is a group of people that take it upon themselves to make sure life is good, charities and clubs have venues for fund raising, seniors are taken care of and visitors have something to talk about.

It started out with two organizations: The Pacific Partnership and the PCAC (Pacific Community Action Committee), a combination of civic leaders, a volunteer city administrator and general volunteers from several charitable organizations, clubs and groups. The PCAC was the group that planned events and I was honored to be the secretary for a few years, before we had a granddaughter to watch. I believe it may have been Bill McLaren's idea to bring all the charitable organizations together under one banner for large events where they would be certain to raise funds for their cause rather than independently hold small, unadvertised events on their own. The PCAC was non-profit, collecting only enough to pay for infrastructure requirements from sponsorship drives, donations and booth fees staggered to benefit local groups over outside commercial interests.

There are events staged from Spring to Winter. Events include Pacific Pride Day in the park featuring turtle races, kiddie fishing tournaments, dog shows and parades, The Great Pacific Barbecue competition, part of the Kansas City BBQ Society, with 50 competitors and a tasting opportunity, shutting down city streets for Cruise Night with fireworks and over 500 registered vehicles with attendance up to 15,000, Railroad Days with train excursion, crafts and booths, Christmas on the Plaza featuring Santa in the old caboose, horse drawn carriage tours, marshmallow roasting compliments of the fire department, carols and hot chocolate. Yes, this is a town that still celebrates Christmas. Our bluff features an annual manger scene on old Route 66. No one complains that it violates their rights. I'm not sure how well that would be received out here.

Oh, before I forget, this is a town filled with churches. After each event, regardless of how late it is (and it's been very, very late) you clean the streets, and by the train tracks, and check people's yards to make sure every little bit of trash is picked up so the town looks nice for Sunday services. That's just how thoughtful the organizers are.

There are a few key people there that made this all happen. Bill McLaren, Sheila Steelman, Brian Knight, Loyd Harris, Tom Butcher, the Bandermann girls, Kay LeClaire, Ron Sansone, Helen Priess, the Mahlers, reporter Pauline Masson. There are many others, these just stick out in my mind as always putting the town's interests first. It takes a lot of time and effort to put on activities such as these. Sponsorships were offered and businesses would receive a star to display in their shop windows letting people know they supported the town. Donations were requested and received. These are not tax supported events. I haven't been involved the last few years but I would imagine that many of the same people are still volunteering- you know it is always a handful of really great people who always do the work. Thank goodness for people like this!

It has its issues, sometimes small town politics are interesting but it is a nice town. The economy has been hard on the area with so many in construction and our Chrysler plant closing. We see small businesses struggling to stay open, trying to compete with the big boys. So I hope the event is well attended and the town is promoted nicely during the segment. There are lots of nice places to live in this country and out here is definitely one of them.

This is some information from the Pacific link on Wikipedia. The Red Cedar still stands as is, but is now a car dealership. I was sad to hear this but renovations would have been much too expensive to meet current restaurant standards. I'm glad I had the opportunity to have eaten there. 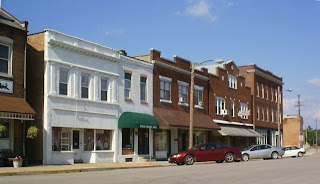 "The Old Downtown Commerce Area is mostly located along First and St. Louis streets. The Historic downtown buildings, built in the late 1800s, have been fully or partially restored and new businesses have moved into the buildings.


Red Cedar Inn
Red Cedar Inn, on the east end of town, was a meeting place for people around the country seeking out one of the oldest restaurants still standing on Route 66. The restaurant closed in 2007." 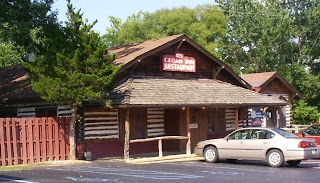 Thank you for sharing your "local color" with us.