This Weather is for the Birds 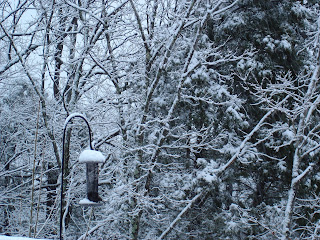 Well, it happened again. It was supposed to be just little wintry mix with snow accumulating only on the grassy areas. Today, as I began my pre-dawn commute, snowflakes the size of Ritz crackers were furiously falling, horizontally as if to create hyperspace flight. Headlights were useless, simply enhancing the dizzying effect, blinding me so I was unable to maneuver the country roadway which is lined by creeks or drainage ditches, both filled to the brim from the evening's rain.

The sloppy mixture blanketed the shoulderless roadways covering the small white line at its edge, my only hope of following the road. I found myself stopping dead in the road, unsure of where I was or which way the road was turning, even though I drive this road daily. In a few instances I discovered I was in the oncoming lane. I knew I would be approaching the horse farm's lake, the one with the drop off if I were to make my mistake there. I breathed a sign of relief when I passed it only to catch my breath as I hit the flooded roadway beyond. Fortunately it was only a couple of inches. It should be a quick rise and fall but something I would rather avoid.

When I was close enough to the main road I saw a line of at least 10 cars, stopped. One car at a time would proceed up the hill towards our only gas station. I knew that I didn't want to try the next 30+ miles in the dark so I cautiously turned around a bit at a time until I was facing the way back home. I thought to follow my tracks but they quickly disappeared leaving me again inching my way home.

By the time I entered the garage I had barely any headlight left, caked with about an inch of sloppy, thick snow. I e-mailed the office explaining that I would not attempt to come in until after the sun rose; however, I may just take that vacation day. Some people go on cruises, some take long vacations. I take snow days! Better safe than sorry and I have already been sorry. I would prefer to avoid another broken bone due to a car accident.

My two mile trip ended up being 1/2 hour, normally a five minute trip. We've got about 2 inches right now and the snow continues. They are predicting 2-4 in Franklin County. It's a big county so I don't know where that leaves us but it's 2-4 more than I like.

It's hard to complain though. The worst that will happen is that I use one of my many generous vacation days (emphasis on many) and I'll stay warm and dry, we have power and water, unlike the victims of the quake and tsunami. 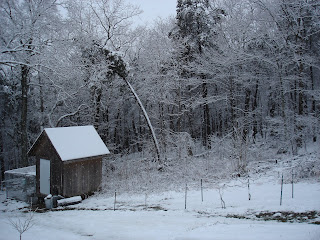 Posted by Kathy Felsted Usher at 9:03 AM