A Light in the Darkness 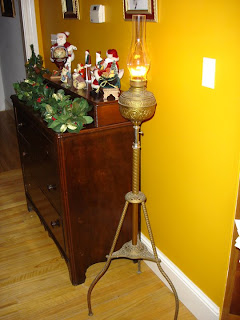 When you wake up in the predawn hours to a dead stillness it is an indication that our ridge top is blanketed in several inches of glistening white snow. If we are lucky it is pure snow, bright, powdery and pretty to the eye, lasting only a few hours until the sun’s warmth transforms it into tiny rivers snaking down towards the woods. Other times it has a hardened crust formed as the winter mix blew into town and just as likely to be concealing a slippery sheet of sleet below. Sparking with a coating of ice, the power lines may hang low, looming under weakened branches cracking with each gust of wind. Those are the scary snows, the ones that pull down the power lines and in this rural area it can be several days before crews restore power. We’re all electric and on a well; consequently, when there is no power there are no lights, no oven, no furnace, no water and no toilets unless you are prepared.

My grandmother never threw anything away because “you might need it someday.” She lived to be just a little over 100 and saved each and everything she ever purchased, inherited or received as a gift. All three stories of her house were filled to the brim with stuff--lots and lots of stuff. To many it was nothing more than a junk filled house but to us it was a treasure trove.

We brought home this oil lamp in 1981 when we made the Furnishing Your House trip before our wedding. It was built in the 1890's and known as a center draft fount lamp popular during the Victorian era because of the amount of light they produce. The light output is very much like a Coleman lantern and runs on lamp oil or kerosene, which is what we're using. It has a conical wick that surrounds a central tube allowing air to pass through the bottom of the fixture and up past the wick, exiting at the top of the globe. It has not been used for about eighty years, until yesterday.

It appears that this design was a breakthrough:

“It was just seven months after he applied for the patent for his improved new lamp, that the patent office approved the revolutionary burner on January 15, 1884. Thus Leonard Henkle was to give the world what would soon become perhaps, the best known kerosene lamp ever introduced. It certainly was the choicest lamp to be devised in the pre-Thomas Edison era. To explain its remarkable properties an 1891 ad from the Rochester Lamp Company provided this description: ...the result was at once most wonderful: all parts of the flame all around its inside surface for over an inch high, were fed... peppered as it were, with nearly a thousand little jets of hot oxygen of the air. From a dull red, with the old button burner, the flame was instantly changed to one of dazzling white.”
The Crooked Lake Review

Through the marvels of the internet we have a source for replacement parts and wicks, plus an expert to guide us through its history and provide care instruction. It is brighter than you might imagine, better than a 60 watt bulb, bathing the room in a warm light perfectly comfortable for reading or a little needle work. We found out that it is a referred to as a piano lamp. The center post allows it to have variable height settings from proper chair height for reading to a full six feet- in case you are playing the piano? Best of all, it does not use electricity, something that we won’t have during a power interruption.
Posted by Kathy Felsted Usher at 8:30 AM

What a beautiful treasure! Thanks so much for sharing link on my blog. I too love old antique lamps. Your grandmother sounds like a jewel.
Lisa