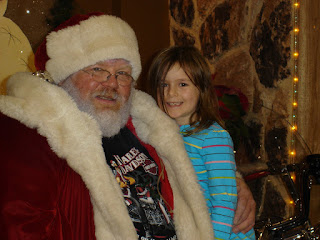 How was I going to break the news that we just couldn’t make it?  She truly is fine girl.  One of the most well behaved children, kind and sharing.   I don’t say this simply because she is my grandchild, it was a concentrated effort of all parties involved to set limits, examples and actually provide discipline rather than have a kiddie free-for-all that is so common these days.  Then it hit us- 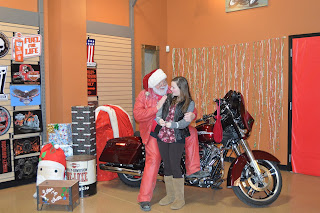 Great find! Good to see you posting again. Hope you have a nice Christmas.

Children often amaze me with their insight and understanding. Kathy, this was a fantastic post! Oh and what a mindful and kind Santa!!!

Too fun! I too have learned many of those bearded, tattooed folks are just good regular folks who don't happen to conform to fashion magazines 😊 Also, wow Taylor is growing up.

What a wonderful tradition.

I hope you all have a Blessed holiday season, Kathy. Merry Christmas!

I'm a Harley hater (my next bike will be a Honda Valkyrie!), but it's a nice picture even if it is with a bike that you have to overhaul every time you turn around. You should buy her a Cushman scooter soon. It'll be good practice for when she gets her Valkyrie...err...Indian, or anything but a Harley!

Great story. The spirit of Christmas if everywhere. - Margy

I think I remember the original post. Has it been that long? Well, I concur; I'm glad to see you posting.

I hope things are going well and that you all have a good Christmas. All's well on my end. Just keep chugging along!

Just thinking of ya. Hope you are well.