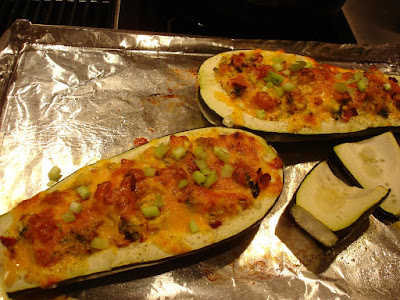 My husband and I changed our eating habits and have lost
about 110 pounds between us:  he has lost 50-55 and I have lost
almost 60 lbs since October.  We've drastically cut or eliminated
most carbs and sugars while eating more vegetables, protein
and fats- the good fats such as animal fat, not the fake fats.
Some might call it Paleo, some may call it Keto
but it's really a variation of either.

I developed ulcerative colitis and diabetes which meant I had
to make some changes quickly and the diets that the doctors
suggested didn't really work well for me.  Then my husband
mentioned the Keto Diet.  I saw the results with a girl I have
worked with for several years and was convinced.
I still have a few carbs due to the requirements of
two conditions but it's minimum.  Wheat Thins with
my block cheese slices and a bran cereal in the morning.

My husband's physical in January came back with terrible results.
The doctor suggested that he start statin drugs right away
and to eat lean with no fats.
My husband said he would change some things and come back in six
months for additional testing.  I will tell you that his numbers
are now stellar.  The doctor can't quite believe it.

So, Google the Keto diet or search for Keto on Facebook
for more information.  I am providing a great recipe that
we made tonight using our own home grown zucchini plus
one of the chickens we processed!

1 very large zucchini or 2 large ones
2 TBL melted butter
Shredded cheddar cheese (use the block cheese) to taste
1 Cup broccoli florets
1/2 chicken shredded (we boiled ours but you can use a rotisserie chicken)
3 strips bacon, chopped and fried crisp
4 TBL sour cream
green onion, chopped, to taste
Salt and Pepper to taste

Preheat the oven to 400 degrees F

BAKE 20 minutes, or fork tender, on a cookie sheet

While baking:
Mix broccoli, shredded chicken, half the bacon and sour cream
Salt and pepper to taste
Set aside

Remove zucchini from oven when the zucchini is tender
fill with the chicken, bacon, broccoli, sour cream mixture
Sprinkle on the other half of your bacon
Top with shredded cheddar to taste

BAKE until cheese is melted and started to brown
We turned on the broiler at the very last to get the cheese nice and bubbly
Top with green onions and, if desired, more sour cream. 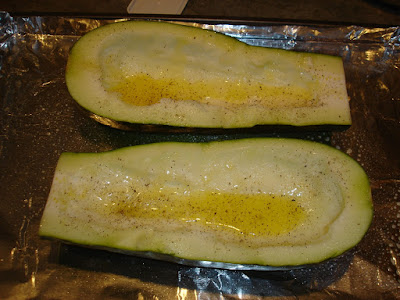 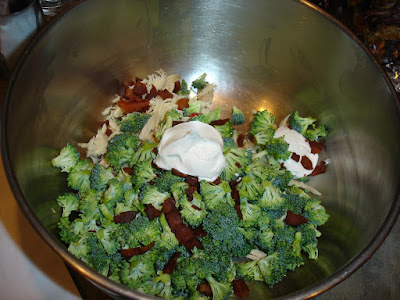 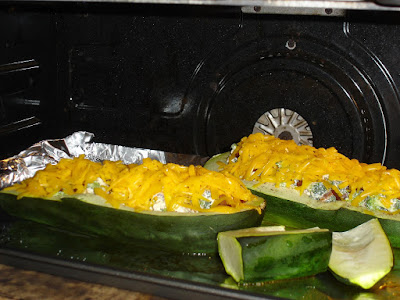 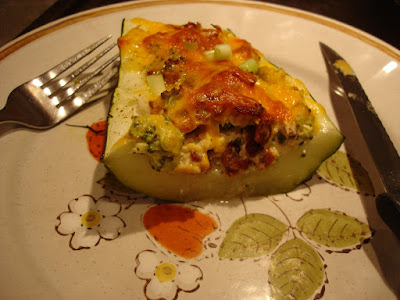 This looks so delicious Kathy!

I knew you had been diagnosed with Ulcerative Colitis ...but not diabetes too!
Man! I hate hearing that.
Great work on the weight loss though.
I think if I could lose some weight, I would improve drastically.
I'll have to check out this Keto diet and see what its all about.
Stay with it!

That looks really good. I usually eat really basic foods, we never seem to cook up exotic things like you do. About the most exotic thing I have is tomatoes with melted cheese on them.

I have been hoping for a large zucchini, but so far they have been pretty small. I like to stiff them with an Italian mixture, or make them into a zucchini style lasagna. That's great about your weight loss and improved health. We really need to do that. - Margy

I was skeptical of the Keto but the results seem to speak for itself and there is nothing in it that will hurt you.

Harry, this one was easy. Anything difficult I leave to my husband to cook. He has more imagination than I do. I'll offer to clean up instead.

Zucchini lasagna might be pretty good. We've done spinach in the past.

I eat LCHF for more then a year now. Love it. Good to read it works for your family too.

Wendy (from the Netherlands)