A Honey of a Deal 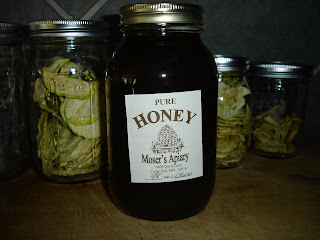 In the next town there is a little corner produce stand, one that started a couple of years ago in the parking lot of a tiny repair shop just off the exit ramp in Eureka at Hwy 44. No one thought much about it, they would just be there for the summer, especially since it's within a mile of two supermarkets. Now newly expanded to the old gas station, Nina's Produce is doing quite well, in fact there are times the parking lot is full. I was lucky to be taking a vacation day so I could scoot in there in the middle of the day and I had the place almost to myself.

I walked past the giant mums, around the watermelons, bypassed the tomato "seconds" and into the makeshift store where I was greeted by endless jars of jams, jellies, honey with and without the comb, locally made tri color tortilla chips, soup mixes and much, much more.

I have been looking for some local honey, not the "who knows what's in it" type imported from other countries. There were the small bear squeeze bottles, cute as a button, but per ounce price was much higher than purchasing the larger jar. I thought about the pretty jar with the honey comb in it but again, I got more honey this way. Maybe another time, because it is so pretty. 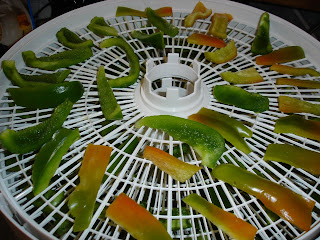 I also picked up some bags of mixed peppers, yellow, orange and green which were three or four for a dollar. They were in good shape but not the picture perfect green pepper all shiny and glistening that you see in your local supermarket. I went ahead and got a couple more at 2 for $1 as well. I had enough to seed and slice up seven layers in the dehydrator.

I purchased an entire bag of navel oranges too. I think I will dry some but a couple may not be pretty enough to dry. I just might have to eat those! (LOL)

It was a good thing that their debit card machine was down and I had to work with cash or else who knows what else may have hitched a ride home with me. I'm thinking it might be some type of jelly, something I've never had. Corn Cob jelly perhaps? Maybe gooseberry jelly? Or, and this is more likely, pumpkin butter or apple butter. It's about that time!

I'll leave you with a photo of my coleus, blooms exploding skyward- 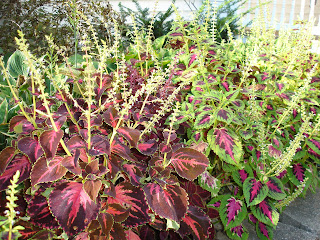 Your coleus are beautiful! Are you going to save them over the winter? I used to do that for my grandmother every year!

I didn't know you could save it. Dig it up and keep in in the house, perhaps a sunny window or in a dark basement like a poinsettia?

I love your Coleus picture, this is the first year in many that I didn't get any planted in my garden, so pretty! I would love to start drying produce, I didn't even think of drying peppers. That produce stand sounds like fun, I love local honey as well.

To winter over Coleus just take a cutting and put it in water, and it will root, and can be replanted next year- there are easy instructions on the web for a couple of ways to save them over the winter- good to do if you have found a color you really love.

I love those little produce shops!

That sounds like a wonderful place! I so wish I had my own.

Thanks you for stopping by my blog. I started putting zucchini in my salsa to use some of it up. Do you have to do anything to the oranges to get them to stay so nice when drying them?
Your flowers are so pretty!

I didn't do anything to them at all. These were at the end of their "perfect" state so maybe that had something to do with it? I cut off both ends leaving as much of the orange as possible. Then I sliced them about 1/4 inch thick and laid them in a single layer at 135 degrees in the dehydrator, overnight plus I let them go the next day while I went to work. Look at page 14 in the Nesco instructions for pretreatment methods and a chart of what to do. It's a PDF so you can save it for later use.

I love local honey! I was buying the "other" stuff for my baking but recently had an ah-ha moment and am now using local! Love your coleus! :)