Bird in the October Sun 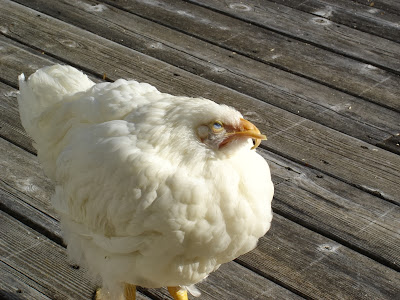 Bird in the Sun
As you learned from the previous post, Bird was jealous
of the Peabody ducks that get to swim in the hotel fountain
and strut around on the roof in the duck palace.
Bird wanted her own palace.

She had to settle for a romp on the deck
soaking up the warm afternoon sun. 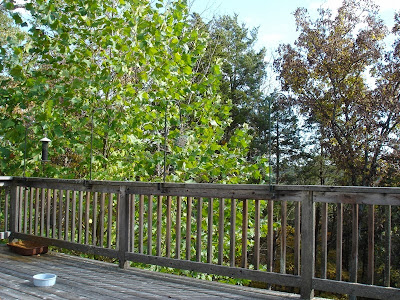 We have a nice, large deck on the back of the house
but we rarely use it since it's also very sunny.
It was relatively nice yesterday so Bird and I sat in the sun
listening to the wild birds flying to the feeders and  back to the trees. 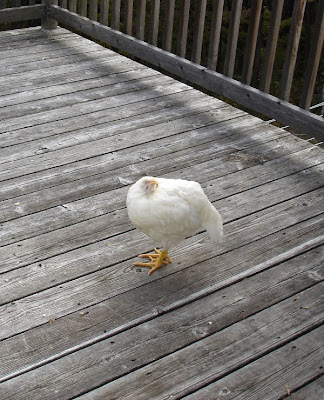 Bird couldn't see the wild birds,
but they could see her
and would fly over to the deck rails
and an take a peek at this bird
sitting with her human. 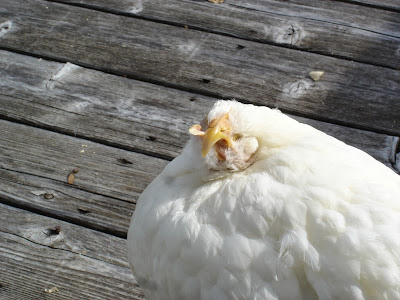 She began to preen,
since you never know when a handsome rooster
might fly by, right? 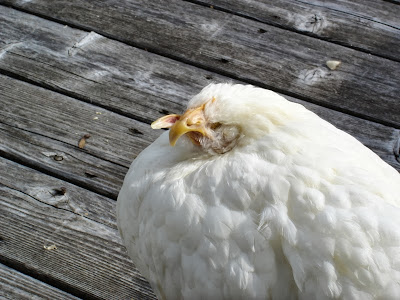 She was so comfortable that she would
nestle down and try to sleep. 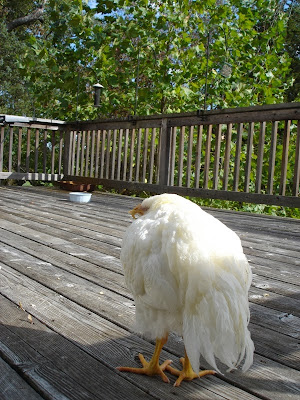 I moved her over into partial shade.
She looks somwhat vulture like here!
She wasn't happy when it was time to go in
but it was enough sun time for the day.

Posted by Kathy Felsted Usher at 8:28 AM

You're the only person I've ever heard of to keep a blind, slightly deformed, non-egg-laying chicken as a pet, but it sure beats keeping a snake! :-)

I have hillary the spider as a pet, don't have to feed her or provide a place to live, no litter box. Could be the perfect pet though they aren't very cuddly.
We haven't had sun in a few days at least when I am home.
Careful there are no hawks out there with the chickie.

A spider would be a very easy pet. I don't think I would try to cuddle, it may end badly! I'm out on the deck with her because, yes we have hawks. They sit in the trees above the chicken run but we have wired the top so they and other things can climb up and over.

Tell Bird I hope she enjoyed her sunning......grin.

Bird had a good day there. She seems to enjoy life. It's sad she has some disabilities, but as long as she is happy what does it matter?